June 25, 2014. HIERARCHAL BOARD MEDITATION. (Robert and MariLyn had returned yesterday from the Mission to Mt. Marcy in upstate New York and Vermont. They gathered with Larry and me at 4:00 o’clock this afternoon to anchor the transfer of energies at I Am Nation headquarters. Lord Michael had signaled Robert this morning that the transfer had begun.)

Soon after we began the meditation, my third eye opened and I had the following vision: A slender, tapered sword of brilliant white light was inserted into my crown chakra. Piercing all the way down my spine, through my chakra centers, the sword pinned or anchored the energy of the just-completed Mission to Mt. Marcy. The four of us present held the foursquare foundation of this force field. I presumed that the sword of light represented the direct connection with Lord Michael. 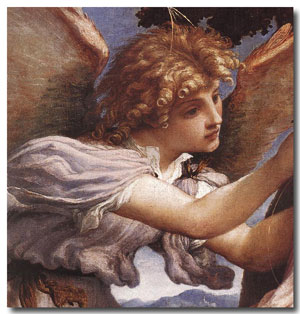 Later in the meditation, I was overshadowed by a loving angelic presence. It was the same feminine angel who has appeared to me several times in recent years, though not since 2012. Each time, she has manifested herself in the same manner: She wears a flowing gown of white light, which pulsates softly with ineffable celestial energy. Her resplendent hair forms curly locks that are golden brown, or reddish golden. I am reminded of how angels have been portrayed by Renaissance artists, such as Leonardo da Vinci or Raphael. Her face radiates a sweet, beatific smile that instantly puts me at ease.

On each occasion, she has brought a healing or soothing energy to my being. I have suspected, though it has not been confirmed, that she is of the Sixth Ray of Transmutation, a personal emissary sent by my supreme guardian angel, Lord Zadkiel. Her feminine presence instills in me a necessary polarity balance for my hieronic channeling functions.

When the angel blended her form with my light body, she worked with my auric field to help me absorb and balance the hierarchal energy transfer.

I asked her what I should call her. On previous contacts, I had sensed that her spiritual name carried a lovely, lilting sound, formed by syllables that contained two l’s. But, to my mild frustration, I never could capture psychically the right combination of sounds.

This time, to my delight, she finally revealed her identification. Onto my third-eye screen, letters of light gradually came into focus: Lu-Leana. Mentally she pronounced it: Loo-Lay-ah-nah; alternatively, Loo-Lee-ah-nah.

As I pondered the revelation, the gentle angel completed her work and disappeared. Alone in a mystical reverie, I felt complete and whole, yet at the same time astonished. Had I received her name correctly? What does it mean? In our sharing afterwards, I told the others I had received the angel’s name, but wanted to ke 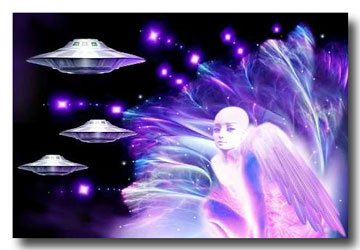 ep it within my heart for the time being, awaiting confirmation.

The next day, it suddenly dawned on me: Lu, as in Allah-Lu, pointed to the title similar to Christ that is used in another realm of our solar system. According to channelings via Nada-Yolanda, L is a symbol of the Elder race. L also symbolizes the descent from the spiritual to the Earth plane level. U symbolizes lifting from the Earth plane of both negative and positive energies back up to the Divine Source.

Searching the Internet, I then discovered that Leana, of Scottish and English origin, means “light.” Another source says it means “serves John” (that is, one who serves God’s love). Also, as derived from the French name Eliane, it means “sun.”

I was flabbergasted! Encoded within the name of the angel are the vibrational frequencies, a sonic matrix, that she holds for my Christ Self. She imparts her name as a way to reinforce my manifested essence as a Christed being, a son of the Light. Within the dual-polarity balance of the Light, I express my birthright as an individualization of Father-Mother God.

Lu does not mean she is of the Elder race herself, since she is an angel and is of a kingdom separate from the race of man. But, being a celestial guardian of created matter, she helps hold intact my light-body form, or Elder consciousness, as I have manifested it both in times past on Earth and in the higher realms and planets of this solar system. As a son of God, created from Love, I must serve Love. When I express my true nature, I am a son/sun being, one who serves Christ or Allah-Lu within each child of God. This is the sacred teaching of the Elder race: Love God and Love One Another.

By identifying herself as Lu-Leana, the angel bestows a precious gift of encoded vibrations, beckoning me to rediscover my completeness and unification within Divine Mind.

Addendum: On three other occasions, this feminine angel has appeared to me: on April 6 and May 25, 2011; and on April 25, 2012. All appearances were during Hierarchal Board meditations; the first two were just prior to channeling sessions. Here are pertinent excerpts of those contacts:

April 6, 2011: “An angelic guardian (of the feminine polarity but not Archangel Uriel) appeared behind my right shoulder. Her presence instantly comforted me. She was arrayed in a brightly glowing white robe or gown, which flowed around her as softly undulating energy patterns. Clairvoyantly I saw her immaculate, beautiful face and her golden brown hair, coiffed in short curls. Her appearance reminded me of a figure I’ve seen in some painting from one of the Renaissance masters, such as da Vinci or Raphael. 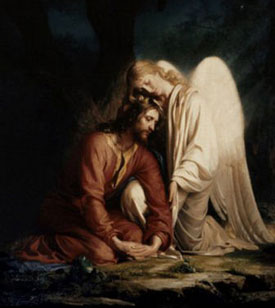 “Standing guard at my back, protecting my energy field, several times she bent down and whispered something in my right ear. Though I was not aware consciously of what she said, each time I replied to her, ‘Yes. Yes. Yes, I will serve.’ ”

In the channeling that immediately followed, Sananda said: “I bring with you the angels to assist you in this new incorporation of your resurrected form; for they are guarding you at all times and are holding all third dimensional elements intact to receive this higher light. Just as they attended me in the tomb, so they attend thee in your tomb, out of which you must now arise to be the blessed peacemakers throughout this Earthly sphere, which quickly now is being propelled into the fourth dimension.”

May 25, 2011: “A female angel stood in front of me. She was the same one who had appeared on April 6, 2011, before Sananda’s communication Arise from Your Tomb. To my clairvoyant vision, again she wore a glowing white robe and manifested golden brown hair. This time, her ethereal beauty reminded me of Sandro Botticelli’s painting The Birth of Venus (though fully clothed!). As with the last contact, I could not latch onto her specific name, although I had the same impression that it contains two syllables formed with a couple of l’s and vowel sounds; in other words, her identity carries a soft, lilting vibration.

“The angel placed on my head a crown that was made of pure diamond crystal, absolutely flawless. Oddly enough, the crystal aureole reminded me of a large wedding band, as if my crowning were also a wedding ceremony. . . . Then she worked in my auric field, blending and molding my elemental makeup with soothing, healing energies.”

April 25, 2012: “A female angel appeared and began working on my auric field. She was the same one who had visited me in two meditations in 2011, on April 6th and May 25th. As in those appearances, she was dressed in a flowing white gown and manifested short, curly, golden brown locks. Her smile and vibration were beatific. I tried to receive her name, but once again only sensed it as a lilting, melodic sound, comprising at least two syllables and a repetition of the consonant l. . . .

“She addressed me telepathically: ‘Phillel, it’s time to move away from your tomb.’ She was referring to my Easter meditation and initiation, wherein I had teleported outside my tomb of soul crucifixion and into a garden of resurrected light. Since that meditation, symbolically speaking, I had never left my position just outside the tomb’s entrance, but had continued to absorb the vibrational frequencies of my new light-body manifestation. It was now time for new action, higher demonstration.

“As soon as the angelic guardian made her statement, she whisked me into another realm. Eventually, we met with a council of angels. Though the guardian gave a report to the council, I was not privy to the specifics.

“When my awareness returned to the physical plane, my Sixth Ray body deva suddenly overshadowed me and solidified itself through my physical form. I knew then that the angel’s work with my force field was to lock me into direct contact with my body deva. Thereby my physical structure would be set at a higher frequency vibration.”

Photos: (1) Detail from Madonna and Child with Saints and an Angel by Lorenzo Lotto. (2) Angel Guide with UFOs © by Hartmut Jager. (3) Christ in Gethsemane by Carl Heinrich Bloch.

One thought on “Lu-Leana: An Angel Revealed”