April 6, 2012. GOOD FRIDAY MEDITATION. During our group meditation on Good Friday, a strong hieronic beam was clamped onto my crown chakra, producing within me subtle symptoms of nausea and itching. The energy projection was for man’s spiritual resurrection. 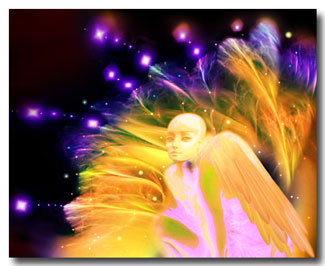 Lord Uriel, Archangel of the Seventh Ray, suddenly appeared, standing at the entrance to my tomb. Her appearance instantly evoked the same imagery of her channeling on March 7th, “Step into the Light.” Yet, this time the tomb’s entrance was right in front of my face, only an inch or two away. Beyond the threshold lay a force field of brilliant white light. Gently it buffeted my face.

Uriel said to me, “Yet a little while and you will emerge.” To the 144,000 elect she reaffirmed, “Everything you do is for the upliftment of humanity.”

April 8, 2012. EASTER SUNDAY MEDITATION. Mother Mary overshadowed me. My light-body force field was greatly augmented, and energy sensations coursed through my aura and physical form. She worked with my soul, preparing the way for a new resurrection of I Am consciousness. I felt as if I were a caterpillar going through transformation in a protective cocoon.

But Mary’s attention was not just on me, for she conveyed that she was working equally with the soul healing of all mankind. “I am pregnant with the Christ consciousness,” she said. “Just as you must follow in the footsteps of Sananda/Jesus, you must also follow in my footsteps in order to birth the new consciousness on Earth. For Sananda and I, twin souls on the Seventh Ray, work coequally to prepare the way for the resurrection of all on Earth.”

Moreover, she relayed that she had ingested all of the interplanetary soul elements that the Hierarchy had been introducing into astral and physical planes in recent months. In her role as mother of Christ consciousness, Sol-O-Man/Mary had incorporated those energies into the “womb” of her 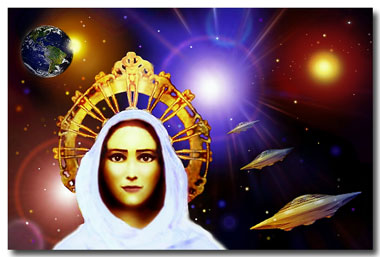 expanded light body and was introducing them gradually to the soul of Earthman, helping to coordinate their smooth integration through the four lower bodies: mental, emotional, astral, physical.

Her work with man’s soul healing and rebalancing is a necessary preparation for a new stage of anchoring the light body on Earth. Indeed, her work on me today is representative of what she is accomplishing on a mass scale, especially with receptive light workers. Just as she had demonstrated receptivity to impregnation by the Christ consciousness in her incarnation as Mary, so must we follow her lead and be receptive to a new birth of the I Am within ourselves.

During my communion with Mary, as she worked with my soul, I had the impression I had known her personally in that incarnation, when she was an older woman, many years after Jesus’ resurrection. (According to tradition, Mary lived to age eighty-three.) Long ago, through dream and meditation, I had soul recall that I was about five years old at the time of Jesus’ ministry in Judea. As a small child, I had encountered the Master once at a village well. His friendly, loving demeanor toward me and my sister left an indelible impression on my soul. When I grew up, I joined the early Christian movement, perhaps knew Paul and several of the original apostles, and later had worked with the preparation of Gospel manuscripts and the spread of Jesus’ teachings. In this communion, Mary’s vibration as an older woman took on a new familiarity to me.

When Mary completed her preparation of my soul, she vanished. Although I had been experiencing considerable energy acceleration in my force field and chakra system, she was not going to channel vocally in this meditation.

Within a moment of Mary’s departure, St. Germain abruptly manifested in front of me, arrayed in all his majesty as Chohan of the Sixth Ray. With amplification from a hieronic space beam, he greatly accelerated my light-body vibration. I began to tingle all over, my respiration changed, and I experienced ecstasy. Then, reaching a peak of light-body transformation, instantaneously I found myself standing just outside the entrance of my tomb, in a beautiful garden filled with dazzling light. (See previous meditation on Good Friday.) My master teacher personally had conducted my Easter initiation, an emergence from the tomb into a new spiritual resurrection.

St. Germain advised me calmly: “Now just take some time to adjust to this new frequency vibration, and smoothly incorporate your light body.”* Obediently I accepted his command, and he quietly departed. I did not move from my spot outside the tomb’s entrance.

Utterly transformed, still basking in the glow of my emergence from the tomb of soul crucifixion, I slowly came out of meditation. For several hours, as I incorporated the new light-body vibrations, I experienced gentle waves of dizziness, nausea and discombobulation. My crown, third eye, and both temples remained activated.

In an amazing correlation, Robert shared afterwards that in his early morning meditation, he too had been contacted by Mary. She had brought him out of his tomb.

* Even Jesus, in his supreme example of resurrection, took some hours or days to adjust his fourth dimensional vibration to the Earth plane. On January 23, 1963, Sananda/Jesus channeled the following via Nada-Yolanda (see Anchoring the Light Body on Earth, pages 66–67):

“Upon that day which you call the rise of the Easter morn, I appeared in the light body unto Mary and I said unto Mary, ‘Touch me not, for I am not yet ready or solidly entrenched in the third dimension with the fourth dimensional body.’

“The atomic structure of the fourth dimensional body was not aligned completely to operate and to condition itself in the third dimensional frequency to the extent of having physical communion or interchange. So, I beseeched her to touch me not. Yet within hours and days I had conditioned the fourth dimensional body to that extent I could precipitate the actual wounds of the cross and allow the disciples to touch those very wounds, and also simultaneously to walk through the walls and to appear in distant places without natural means of transportation. . . .

“Be prepared and be alert, for you are in the days of this manifestation when those who are of the Christ-light workers and servers shall bring forth that light body, along with the fleshly form, and show you — or I should say show man, all men — that it is demonstrated unto each one as it was demonstrated to a few in the days of Galilee by Jesus the Christ, the son of the living Father-Mother Creator God who is in each and every one of us.”

One thought on “A Tale of Easter Resurrection”