September 28, 2011. HIERARCHAL BOARD MEDITATION. As we began the meditation, an electromagnetic space beam was clamped onto my head, giving me the sensation of wearing a formfitting skull cap composed of bright white light. I focused on our unit’s ongoing preparations for the South America Mission. Some minutes later, St. 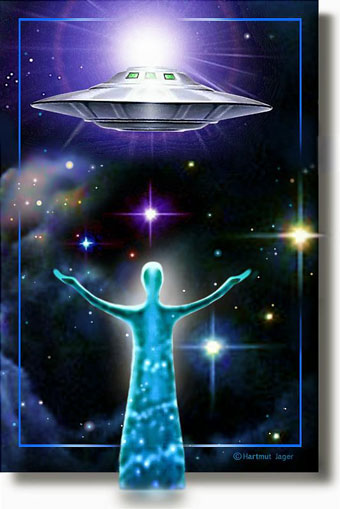 Germain overshadowed me. He reinforced the protective energy capsule he had placed around me last week. The force field was strong and pure, solidly braided with his own light form.

While I incorporated the enhanced vibration of this bonding, Rebekah of Venus appeared. As in her previous contact, she manifested dark brown eyes and hair, which was cut in bangs. With tender care, the Venusian “mother” slowly entered my force field, melding her female polarity with St. Germain’s masculine presence. Momentarily, my light body assumed a Venusian appearance, evoking my soul memory.

Mentally, the two conveyed that they would assist my magnetic balance within the capsule of protection. Vibrationally, they would hold me in a balanced male-female polarity for any contact sessions during the South America Mission.

To demonstrate their combined action, they performed universal sign language, moving my hands slowly in specific configurations to project a sampling of hieronic energy to Robert and MariLyn. During the mission, I would be used as a hieronic grounding agent to assist the hierarchal transfer of energies to the traveling duo. As a triangulated team on the physical plane, our force fields were interlocked, were sensitized to one another, and would operate as an integrated circuit, allowing an unimpeded flow of energies back and forth. From the reality of spiritual oneness, of course, physical distance would be no factor.

After the trial session, I was consumed by the violet flame of transmutation. St. Germain relayed that, as his Sixth Ray disciple, I must hold the three of us at headquarters in the violet flame for the next two weeks in order to secure a pristine force field for the Hierarchy’s last-minute preparations. With his instruction came the image of an ultrasophisticated scientific laboratory or a hospital operating room, wherein everything is carefully sanitized. The violet flame would burn off any dross, both within and without, and thus would maintain a necessary purity within our collective thought field. So be it.

Note: Robert had an extensive, heartfelt communion with his master teacher, Sol-O-Man/Mary, and her band of female assistants. She was preparing him to hold a higher manifestation of her vibration and to be a clear conduit for her energy projections during the upcoming mission.

One thought on “Magnetic Balance”