November 13, 2017. DREAM. At a farmhouse in the country, I had gathered with other light workers. We were busy coordinating a task outside. 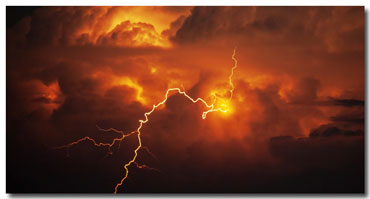 Looking toward the horizon, I saw menacing, pitch-black storm clouds advancing rapidly across the plain. The huge tornadic storm filled the sky. Instantly alerted, I rushed everyone inside the small, white, wood-framed house. There was no other place to seek shelter in the exposed environment.

The storm, spawning multiple twisters, swept away everything in its path. To our horror, when it reached within a mile of the house, it suddenly transformed into a raging firestorm. From the heavens, massive sheets of fire rained upon the earth. Flaming whirlwinds gouged and scorched the land. The firestorm sped relentlessly toward us.

There was nothing for us to do but pray. We surrounded ourselves with a protective dome of Christ light. 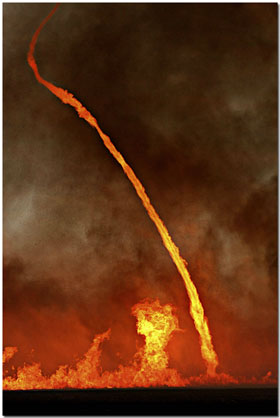 Miraculously, the fierce whirlwinds abruptly stopped their onslaught just a few yards from our house . . . and then passed us by. The building was untouched. We had been spared!

In the calm aftermath, as the firestorm moved away, we went outside to survey the damage. Across the land, as far as the eye could see, there was devastation.

Interpretation: As with my recent dream of October 25th, transmutation advances across the Earth. The fires of purification will affect anyone and everyone. But in the midst of the storm, true safety lies in the protective white light of one’s Christ Self.

The Latter-Day changes, both natural and man-made, are upon us. In this Battle of Armageddon within the soul of mankind, burn off the dross of the mortal self and be transformed into the golden I Am Self.

Note: Subsequent upsetting events occurred, affecting the masses, that attest to the storm of thought patterns being signaled in my two disaster dreams. On November 24th, in the Egyptian Sinai, 305 people were killed and at least 128 were wounded when terrorists bombed a Sufi Muslim mosque, then sprayed fleeing worshippers with gunfire. It was the deadliest terrorist attack in modern Egyptian history. (Sufism is the mystical form of Islam, which Islamic radicals deem heretical.)

Beginning on November 25th, Mount Agung in Bali erupted for the first time in half a century. More than 70,000 people were forced to evacuate the danger zone as the volcano spewed massive clouds of ash in the following days.

On November 28th, North Korea tested another ICBM missile, the first since September, that achieved the highest trajectory and the longest flight yet, capable of reaching all U.S. cities if translated to a flattened trajectory. Tensions between the United States and North Korea have ratcheted up as a result.

Then, in early December, half a dozen wildfires exploded in Southern California, fanned by Santa Ana winds reaching at times hurricane force. Hundreds of homes and other structures have been destroyed, and more than 200,000 people have been evacuated out of harm’s way. The devastating outbreak came on the heels of a swarm of deadly wildfires in October in Northern California. The 2017 fire season in California has been the most destructive on record.

In addition to the above, on December 6th, President Donald Trump recognized Jerusalem as the capital of Israel and announced plans to relocate the U.S. Embassy there. The historic yet controversial announcement, which long had been promised by previous U.S. presidents but never carried out, sparked new tensions in the Mideast. Protests broke out in multiple countries. Gainsayers feared the move would disrupt prospects for peace between Israelis and Palestinians.

Virtually always, my dreams of catastrophes are meant to be interpreted symbolically, analyzing thought patterns in mass consciousness, or even within my own consciousness. Typically, disaster dreams represent transmutation and purification. Nevertheless, it is uncanny that subsequent outer events oftentimes mirror specific dream scenarios; for example, a dream of a tornado will precede an actual occurrence of such. In the case of my firestorm dream of November 13th, it is disconcerting to note that in early December horrendous firestorms erupted physically in Southern California.

Catastrophes in the Latter Days

Safe Amid the Storm

3 thoughts on “The Coming Firestorm”