August 26, 2013. DREAM. MariLyn, Robert and I sat in meditation. As soon as we finished the Lord’s Prayer, Dr. Hannibal contacted me with a hieronic beam that was so powerful that it nearly sent me into a trance. He transmitted the hieronics directly into the devic-elemental kingdoms for their transmutation and upliftment. Once the silent projection was complete, he channeled a vocal message. (When I awoke, I did not recall 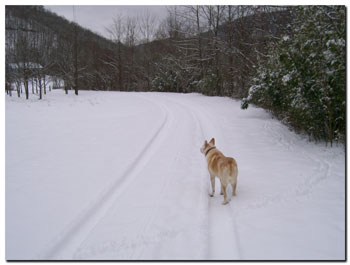 The scenario shifted. I was walking quickly with Cheyenne through a snowy forested landscape. Cheyenne was connected to me by a leash that was a large, thick rope. She was alert, vigorous and strong. Although she was on the leash, she was ahead of me, almost pulling me as if she were a lead dog on a mush along a snow-covered pathway through the woods. Oncoming truck traffic earlier had careened down the narrow forest road leaving hanging branches and fallen trees strewn about. But resolutely Cheyenne and I made our way forward; the obstacles did not deter us. We knew our destination and the route we traveled together. Cheyenne’s power was extraordinary to behold.

I awoke from the dream at 1:15 a.m., quickly wrote it down, and went back to sleep. Right before I awoke in the morning, I dreamed I was with Yolanda and some others of 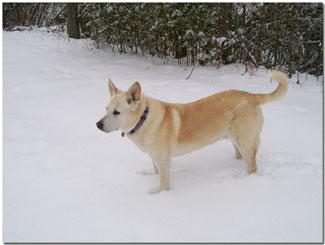 the staff in her office. Cheyenne also was there, lying in front of me. I told Yolanda of my earlier dream of the hieronic transmission to the devic-elemental kingdoms and the vocal communication from Dr. Hannibal, then of traveling across a snowy landscape with Cheyenne. Smiling at the news, Yolanda gave me a thumbs-up.

Interpretation: When I awoke, my heart felt a little lighter; my sadness had lifted. The snow represents the crystallization (the solid forms set in place) of the familiar patterns that had been established in my close companionship with Cheyenne on the physical plane. We had traveled a long road together for over fourteen years, always aware of our mutual destination in Spirit’s plan. The large rope, as a leash connecting us, indicates our strong akashic bond. As applied to me personally, the logs and limbs strewn about symbolize the emotional decrystallization (or subconscious debris) as a result of my grief at our physical separation. Yet Cheyenne, strong and alert, remains with me in Spirit. Resolutely we travel forward as one.

The snowy scenario also could represent the trail Cheyenne are I are blazing as interkingdom partners. New patterns not only are being forged in my subconscious but in the astral planes generally as Earth is raised into the fourth dimension.

Dr. Hannibal’s transmission to the devic-elemental kingdoms and his subsequent vocal channeling recall the revelations I received in my heart-to-heart communion with Cheyenne and the masters at our Hierarchal Board meditation on August 14th, just five days after Cheyenne’s transition. The power of the hieronic transmission in the dream clearly gets my conscious attention.

The dream connection with Nada-Yolanda reinforces my interdimensional relationship with Cheyenne for devic-elemental work to come. Nada’s thumbs-up indicates I am moving in the right direction in my healing and adjustment.

Note: This is my first solid dream contact with Cheyenne since her transition. I did have one dream last week wherein I had called her name and she appeared briefly on the periphery, but then vanished into the night. At that time, the contact was not ready to gel.