December 9, 2014. DREAM. Using a special medication, the veterinarian restored Cheyenne to life. I brought her back home to headquarters. Everyone was 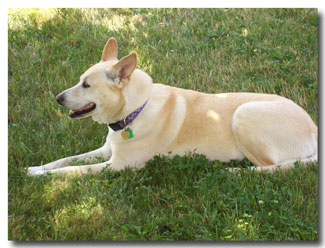 truly amazed and happy to see her again. I knew that Cheyenne, as an elder “sister,” would help Shasta develop her maturity. Excited to meet, the two dogs began romping around together. Watching them from upstairs at Trinity House, I was very pleased to see them instantly bond. Shasta soon learned how to go down the outside stairs for the very first time. (She has not yet conquered that in real life.)

One of our neighbors in the valley drove over in his tractor. Flabbergasted to see Cheyenne alive, he questioned whether she ever had died. I assured him: “Cheyenne indeed made the transition. I held her in my arms as she died, and I buried her right over there. But now she has been restored. She is with us again.”

Interpretation: This is my first dream of Cheyenne and Shasta together. It appears to signify a new interdimensional bonding between them; perhaps also a happy 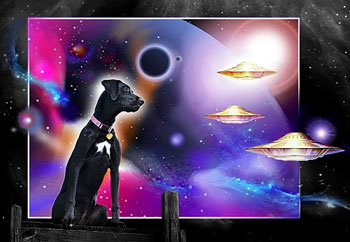 bonding of the two in my own thoughts and feelings. The key word in the dream was restored. This also has implications, of course, for my own spiritual restoration, or regeneration, as highlighted in other dreams in this cycle.

Upstairs at Trinity House represents the connecting link at headquarters, and in my own consciousness, with the higher realms. The stairs are the go-between. Maybe Shasta, who is now thirteen months old, is gaining a new facility of travel between physical and astral planes. The metaphor evokes Jacob’s ladder (Genesis 28:12); or, to make it a pun with my surname, Jacobs’ ladder.

The veterinarian was unidentified. In other dreams where I’ve interacted with a medical doctor (always unidentified, as well), I have tended to associate him with Dr. Hannibal, my master teacher. Or perhaps he represents someone in Hannibal’s spiritual coterie. The vet, who had dark hair and was of average size, looked similar to those other dream doctors.

Stand By for Pressurization

December 10, 2014. HIERARCHAL BOARD MEDITATION. Dr. Hannibal contacted me, locked a hieronic beam onto my crown chakra, and mentally relayed, “Stand by for pressurization.” Then, as if I had been placed in a space capsule or a space suit, the hieronic beam began to “pressurize” my auric field, causing various sensations through my four lower bodies. When the energy equalized, or my vibrational frequencies became balanced, I anchored a strong download of light. No information was relayed. I simply acted as a receptive vessel, a hieronic broadcasting unit. 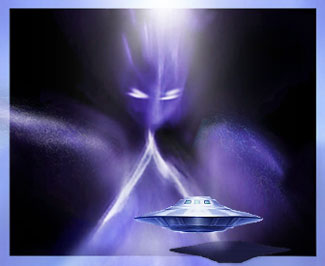 Toward the end of the meditation, a powerful deva appeared. He manifested to my clairvoyant sight as a definite etheric form, arrayed with multicolored light patterns. Through thought transference, he informed me that he was a devic chieftain in our East Tennessee area. His realm of responsibility over nature forces encompassed, yet extended well beyond, our headquarters property in the Cumberland Mountains. He had established direct contact in order to ground and to integrate the higher energies through our property and area of influence. He manipulated fourth dimensional energy forms in order to seal a force field of protection and balance through our auric atmosphere for our light-body projections. The devic chieftain did not identify himself by name.

During the contact, I was reminded of the recent contact with Golden Eagle, the higher astral Indian chief. In a meditation on November 29th, he had announced a reinforced pact with Conrad for the current energy influx. Undoubtedly, the devic chieftain, along with devic-elemental forces under his command, had been brought into the interdimensional coordination.

Note: Afterwards, Larry Peterson shared that he had had a remarkably similar experience in meditation, as he too had felt pressurized in a capsule of light.

December 17, 2014. DREAM. While Robert and I were conferring about plans for the coming day, Sananda overshadowed us and telepathically relayed his instructions. Simultaneously he scanned us with a hieronic beam, reading our auric fields. With my clairvoyant vision, I saw the laserlike greenish blue light of the scanning rays sweep our forms.