September 22, 2013. DREAM. Along with others, I had been elected to the U.S. House of Representatives. An induction ceremony was held. I was given a ring to place on the ring finger of my right hand. The insignia or symbolic logo of the House on the ring face was turned or pointed first to the inside of the palm. After the induction, the insignia would be turned around to the top of the finger, facing out. 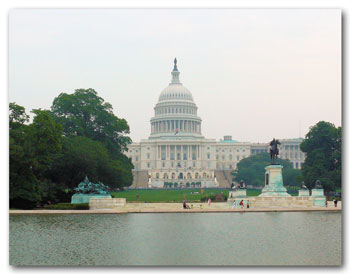 Next, we inductees had to immerse ourselves in a pool of water and walk to the other side. The act represented a baptismal purification before we could officially assume our responsibilities as elected officials. Each of us entered the pool, even though fully clothed. (Males were dressed in a suit and tie; females, in a dress.) We walked through the neck-high water and climbed out the other side. There we were congratulated and accepted as full, functioning members of the House of Representatives. We then prepared for our orientation as lawmakers, learning the system and the responsibilities to which we had been elected.

Interpretation: In its spiritual role as a pattern-setter to implement spiritual government on Earth in the New Age, the United States is the New JerUSAlem. In my dream, the House of Representatives is a symbol for a branch of the spiritual government, or Hierarchal Board, in externalization on Earth. The key word is representatives. As light workers, we are representatives, exemplars, pattern-setters for countless others on the Earth who are reawakening to their inherent birthright as sons of God. We are harbingers for the manifestation of Christ or cosmic consciousness. We are elected to these roles because we select selflessly to serve God and our fellowman. This is the fundamental meaning of the elect, the chosen ones, the Christ servers in these Latter Days: we freely elect to raise humanity into the New Age, and therefore Spirit chooses us to do the job.

Before assuming higher responsibilities in our functions as lawmakers (those who enact the spiritual laws of God), we each must pass through a baptismal purification, thereby cleansing ourselves of any personal desire but to serve God. We enter this purification fully clothed in the appropriate knowledge of our aptitudes and functions in the present incarnation. Only after the purification are we able to “turn the ring around” and reveal the insignia of our elected office; that is, to demonstrate our conscious power (right hand) to exercise our spiritual responsibilities as sons of God.

The dream signals that a new induction, or spiritual step, is occurring now, with the onset of the autumn cycle on this very day. Orientation has begun.

September 23, 2013. DREAM. I was with El Morya/Mark and his staff (no one I know consciously). He was showing us how to prepare his special recipe for a dinner roast.

Interpretation: The dream symbolizes an inner plane connection with El Morya and his team on the higher astral planes. The special dish represents the spiritual nourishment being prepared for the upcoming Teton Mission.

September 25, 2013. HIERARCHAL BOARD MEDITATION. At our weekly meditation, I joined in triangulation with Robert and MariLyn, who depart for the Teton Mission on October 1st. Our light-body energy fields were fully aligned. 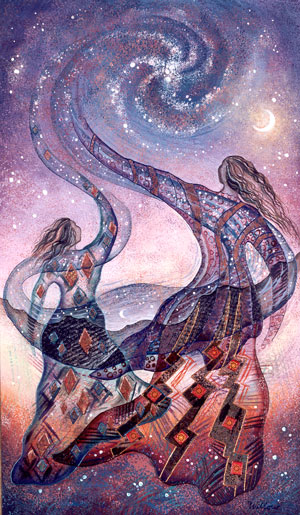 Suddenly, I was overshadowed by an astral Indian chief. He announced his presence simultaneously by projecting to me a vision of a golden eagle in flight. The powerful chief, who wore ceremonial regalia and a full headdress, apparently is associated astrally with our area of Tennessee. Repeatedly during the contact, the vision of the flying eagle returned. I assumed that the vision meant that eagle was either part of his name or symbolized his high spiritual function.

Next, an astral Indian maiden appeared and melded her force field with mine. Her straight dark hair fell at least to the middle of her back, and she wore a long deerskin dress adorned perhaps with a feather and some simple beadwork. She was the feminine complement of her male counterpart, the astral chief. My communion with the two balanced polarities bespoke a coordination with astral Indians for the upcoming Teton Mission.

After several minutes, Conrad signaled me in my heart chakra and clamped a hieronic beam onto my crown chakra. Once he solidified the electromagnetic connection, he opened an interdimensional portal in the seventh astral plane. He informed me that through the portal, or open gateway, he would be able to relay cleanly Dr. Hannibal’s etheric spacecraft projections into our headquarters force field during the Teton Mission. For these interdimensional transmissions, he was fully coordinated with the astral Indians. That is why he had engineered my contact with their representatives, the chief and the maiden.

Then Conrad, with his space team, proceeded to test all the hieronic lines of force, bringing me into precise synchronization for the forthcoming projections. He revved up my chakras, particularly my throat or power center, as if he were preparing me for a vocal channeling. He even partially levitated my left hand, as if to clear the way for universal sign language. But I soon realized he was performing what we pilots call an “engine run-up,” part of a checklist to make sure all aircraft systems are nominal prior to takeoff.

Toward the end of Conrad’s hieronic testing, Kaileah and Cheyenne, the so-called Astral K9 Unit, were brought into my 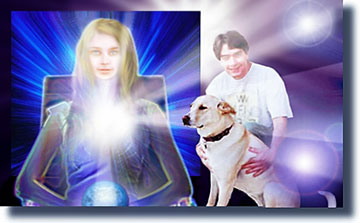 force field. I visualized enfolding Cheyenne in my heart chakra, as St. Germain had suggested to me shortly after her transition. [Click here.] Conrad revealed that he was coordinated, too, with Kaileah and Cheyenne for energy transfers to the devic-elemental kingdoms. All is ready. All is in sync vibrationally among interdimensional (and interspecies) forces for the hierarchal mission.

September 27, 2013. DREAM. An instructor, operating a handheld remote control, showed El Morya/Mark and me a special computer program whereby he projected onto a wall-sized screen a real-time satellite view of the United States. The image, of a superfine resolution, could be telescoped quickly from hundreds of miles up all the way down to small details at ground level. After the demonstration, I attempted to operate the remote to show Mark my boyhood home in Lufkin, Texas.

Interpretation: The computer program and the real-time satellite image represent techniques used aboard hierarchal spacecraft. Again, I am with El Morya/Mark, signifying my inner plane preparation and coordination for the Teton Mission.

September 28, 2013. DREAM. I was walking with Cheyenne, MariLyn, Robert, and an unidentified spiritual teacher. (We were positioned left-to-right in that order). We discussed the upcoming Teton Mission. Cheyenne was on a leash, which MariLyn was holding. While Robert talked momentarily with the teacher, I chatted with MariLyn, then reached down and affectionately petted Cheyenne.