June 10, 2013. MEDITATION. In the afternoon, I was contacted by a strong electromagnetic space beam from Dr. Hannibal’s hieronic ship #1236. My crown chakra was so impacted that I could not work, so I sat in meditation. From about two o’clock till after three o’clock, I was immobilized by the beam as hieronic energies poured through me. In an altered state of consciousness, I received the following intunements: 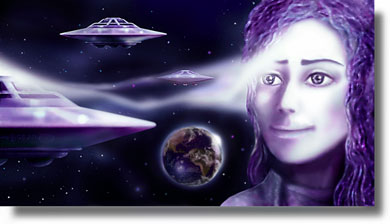 Ship #1236 will remain in etheric orbit above I Am Nation headquarters through the summer solstice, June 21st, in order to finalize the transfer and the anchoring of hieronic data streams through our force fields once Dr. Robert and MariLyn return from the East Asia Mission on June 16th.

Zorrah of Neptune, still on assignment for “route management,” will return to I Am Nation headquarters with Robert and MariLyn and will assist in the grounding of energies through our “physical magnetic matrix.” With his higher-dimensional physical vibration, he can offer unique assistance in this anchoring.

In addition to his service on the East Asia Mission, Zorrah’s renewed contact with this unit has allowed the Hierarchy to conduct experimental trials that have ramifications for our future contacts with physical space beings of the solar system. As the third dimensional physical energies of Earth are raised and brought into greater alignment with the vibrations of other planets of the Federation, greater interchange with other higher-dimensional physical beings will result. Zorrah’s contact has been a test case for collecting valuable data. Clues to these behind-the-scenes experiments may be found in Zorrah’s messages.

Afterwards, I searched the communications and found the following examples. Most recently, in his June 5th channeling, Zorrah hinted: “There are interplanetary reasons that Summalt and Hannibal have allowed me to fine-tune my vibrational frequencies with you in this way, in order to deliver this transmission.” His references to the “crystal bridge of light” and “interstitching” our vibrational frequencies further allude to these experiments.

Two months ago, in his communication on April 3rd, he tellingly stated: “Consider that in this experimental session not only are we working on specific situations that we need to synchronize ourselves with for this mission, but in its truest form we also are implanting the memories of these experiences of your interplanetary contacts on this planet with those of other planes and planets of this solar system, and also from those who occasionally come from beyond. So, we are serving equally a planetary function as well as focusing on these preparations of this unit for the East Asia Mission. For as we plant this seed within this core group, we also embed it fully within the planetary orb, the auric envelope, in order to prepare your citizens of Earth for their eventual reunification with all brothers and sisters of this Federation of Planets within our solar system.”

On April 10th, Zorrah channeled: “Because my team and I carry a unique bandwidth in association with the Neptunian influence of First Ray action — that bandwidth being expressed upon higher physical dimensions of the planet Neptune — we are able to introduce into this planetary sphere a new element to aid in the upliftment of the various vibratory levels of this Earth planet: from physical up into astral, joined with the etheric, which of course has overriding influence over all vibratory wavelengths associated with this planetary orb.”