DR. HANNIBAL/ST. GERMAIN: Dr. Hannibal/St. Germain, master coordinator of Western Hemisphere realignments, on preformatted mental hieronic relay to our interdimensional teammates on Earth and throughout astrally conducted environs. Through the many inspirational means at our command, we plan a well-rounded dispensation of light projections during the South America Mission.

All servers of light are at their posts, made ready for action as we prepare to launch our Healing Haven team into the heart, mind and soul of the southern continent.* For our purposes and yours, Panama serves as a highly acceptable way station as we accelerate their multidimensional integration for demonstrations now to ensue. 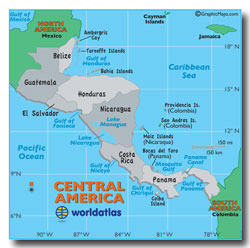 Consider the Panamanian land bridge from our etheric viewpoint. Symbolically, you may think of this geographical area on your physical plane as a hinge between the two continents. We use that term hinge to stimulate your thoughts along the lines of magnetic dual-polarity interchange between the two major cultural and geographic land masses. Energies anchored in this region allow for a swinging back and forth of magnetic energies; perhaps a form of alternating current, to use an analogy convenient to your third dimensional understanding.

Magnetic currents, positive and negative, flow throughout the Earth, enhanced continually by the race of man who generates Son-of-God thought power to form a community bonding that stabilizes his life in all aspects on the planet. Often we have spoken of East and West polarity functions as they outpicture on the Earth. Western thought and development correspond to the positive-male-active pole or principle of manifestation. Eastern demonstrations correspond to the negative-female-passive pole. Both serve one another in man’s balanced evolution on Earth.

Within this East-West magnetic principle, we have subelements or subcategories or subcycles of positive-negative exchange, flowing back and forth to serve the balancing of magnetic polarity. So, ponder this thought: in the back-and-forth of polarity interchange in this Western Hemisphere, North American development often serves as a positive-active pole to implant and to stimulate development throughout South America, enacting the receptive-negative pole. Through positive action of light incorporation, we embed new growth patterns from one anthropological arena into the other, and vice versa. Again, as with an alternating electrical current (although not entirely precise in its analogy), we can switch these magnetic currents back and forth; we can swing things around, so to speak, and coalesce energy patterns from South America and introduce them, or plant them, into North America. 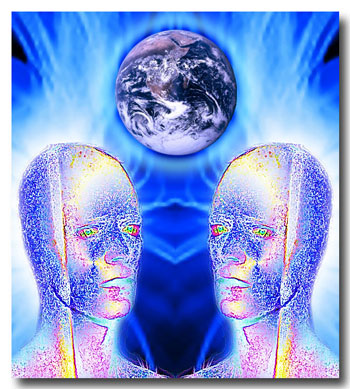 You have the same principle in male-female interaction at a personal level. The male polarity, or man or conscious aspect, actively incorporates his seed within the female polarity, or woman or subconscious aspect, to produce new generation of thoughts, concepts, actions, even new life form. In a perfect exchange, the energy flow is smooth, unimpeded from mind to mind.

As a further example, our dual Healing Haven team has been fine-tuning this interchange. Dr. Robert, performing as the active-male principle, introduces into MariLyn, performing the receptive-female principle, new ideas, new visualizations, new decrees. She takes them and gestates them throughout her receptive subconscious portrayal, and births a new, wholly balanced response. But the magnetic polarity balance can reverse itself, swing back; thus, MariLyn can be called upon to perform the active polarity, while Robert will receive. It is a dual action of magnetic balance, operating to serve the whole union.

As you know, it operates thusly within the consciousness of each individual, as well as within couples and within collective groupings of mankind, on up through nations and hemispheric developments, even into interplanetary functions. The chain is endless, just as Father-Mother God, the dual-polarity Creative Source and Energy of the universe, is eternally balanced and at one with all His-Her manifestations of Cosmic Being. Hear, one and all: the Lord our God is One!

With these thoughts of magnetic polarity balance, we thus bring into alignment all our forces of light, throughout all planes, to receive the hierarchal dispensation for renewal, for reintegration, for reharmonization, for reunification throughout this Western Hemisphere; which likewise serves the planetary rebalancing, West and East.

Proceed each step as given unto you to unfold and to enact in this balanced polarity functioning. In this balance of give-and-take, you thereby serve the one program to create the planetary force field for the Second Coming, both of Sananda/Jesus as Prince of Earth and of the return of all to cosmic consciousness during the Aquarian Age now upon you. Hail to the Christ in thee, an eternal expression of balanced male-female polarity. As pronounced in the scriptures, “Male and female created He them.” [Genesis 1:27]

Dr. Hannibal/St. Germain, on mental relay from my mother ship #1235 as I shadow our Healing Haven duo now at the hinge point of Panama.** All is balanced, all is well, all is integrated. Stay tuned to our frequencies, balanced in polarity from etheric and celestial realms, through astral kingdoms, and unto your physical manifestation on Earth. So be it. Over and out.

Note: Receiving hieronic-beam contact, I sat in meditation at 10:25 a.m. The communication, dictated onto computer, began at 11:30 a.m. and ended at 12:40 p.m. Afterwards, as I rebalanced myself from the channeling, my heart chakra remained accelerated for several hours, even to the point of discomfort.

[For correlations, confirmations and ongoing reports during the South America Mission, be sure also to check Dr. Robert’s blog.]

* Dr. Robert and MariLyn departed on the South America Mission yesterday, October 13th. The first leg of their journey takes them to Panama City, Panama. On October 15th they will fly to Lima, Peru, their first stop in South America.

** shadow: Interestingly, aside from the common dictionary meaning of “to follow especially secretly; trail: to accompany and observe especially in a professional setting,” there is the archaic meaning of “to shelter, protect.”

« Golden Giants Have Returned
Walk in My Footsteps »