February 5, 2010. DREAM. Golden spaceships, light forms from a higher dimension, suddenly manifested in the skies all around 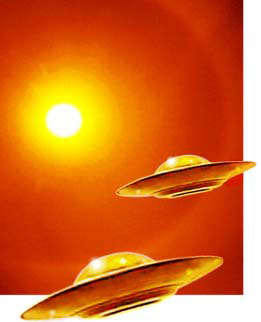 the Earth. Nada-Yolanda said to me: “It will be some days before they can land, as they first have to prepare mass consciousness to absorb and to adjust to their higher vibrational frequency.”

Interpretation: Following on the heels of my contact with St. Germain at the Hierarchal Board meditation on February 3rd [click here], this dream is another clear indication, both on personal and planetary levels, that the Hierarchy is preparing the next spiritual energy influx, to begin soon.

Golden spaceships symbolize the light body, the other-dimensional forces, the amassing of Spirit’s power to bring about a new landing of light on Earth.

At the moment, I have no idea if the dream also signals new landing attempts in Operation Landing Light, the Federation’s systematic program to make official contact with Earthman.*

* Operation Landing Light: hierarchal space program instituted June 21, 1967, as successor to Operation Show Man. Preparation for mass landings of interdimensional spacecraft on Earth. Had been mentioned through Yolanda in 1960, and through other channels around the same time. See Visitors From Other Planets.