November 13, 2013. HIERARCHAL BOARD MEDITATION. The meditation mainly was a rebalancing of my force field. I experienced a solid connection with my high Self and the spiritual Hierarchy, plus a strong implantation of energy. As I linked with Robert and MariLyn, still on mission in Washington, D.C., I visualized spiritual protection for the three of us as well as for our headquarters property. 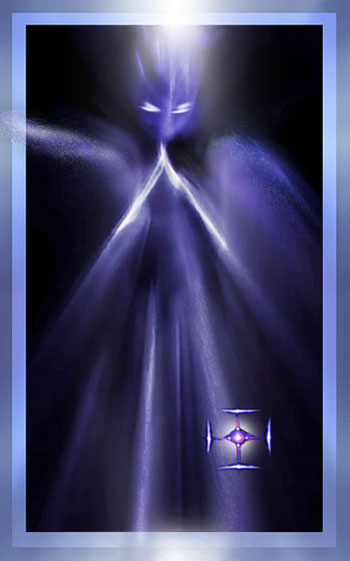 Around 8:10 p.m., about forty-five minutes into the meditation, I was enfolded in a soothing, elongated violet flame. The exquisite violet hues gently rippled with vibrant life energy. It was glorious to behold, yet is impossible for me to describe in mere words. As I united with this living flame of the Sixth Ray of Transmutation, suddenly I realized that in reality I was viewing a flamelike entity who was separate from, but totally unified with, every aspect of my multidimensional form: it was my own body deva.*

Manifesting as a male polarity, he had appeared to my clairvoyant sight in order to help me rebalance my four lower bodies: mental, emotional, astral, physical. During the D.C. Mission, the stress of the hieronic energy transfers into I Am Nation headquarters has exacted a personal toll. In coordination with my high Self, the body deva worked through my light body to manipulate a healing and a realignment of my lower frequencies.

As I basked in the restorative essence of my home ray, giving thanks to the body deva for assistance, I became aware that I was surrounded also by a group of Sixth Ray angels. The interdimensional contact, up close and personal, comforted me beyond measure. Intimately, I was cared for and protected on all levels of my being, from my light body through my auric field and into my physical form. With the aid of these heavenly messengers, I became wholly transformed, transmuted through the power of light and love.

* Body deva: An etheric entity from the devic kingdom (nature forces), under the direction of the angelic kingdom. Each individual has assigned to him or her a body deva who helps to sustain and manage the third dimensional, physical form as it undergoes metamorphosis to anchor the fourth dimensional light body.