November 12, 2013. It has been another challenging, almost overwhelming day of hieronic transfers, especially all afternoon. I found it difficult to operate on the third dimensional, physical plane. By four o’clock, I had to stop work and curl up in the chair for an hour and a half. I could hardly move. With so much light constantly pouring in, I had the feeling again of wanting to crawl out of my skin, or that everything on the physical was disintegrating 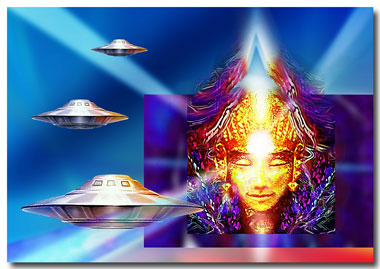 into light energy. I was intermittently dizzy and subtly nauseous, too.

During this energy input, I had contact with Conrad, as well as briefly with Sananda and Krator. The latter two, I believe, were touching base to monitor how I was doing. All I could do was anchor the energy and send it out. I also felt very linked in with Robert and MariLyn in Washington, D.C., and I surrounded us all with a dome of golden protection as I breathed in the etheric light.

In the evening the energy let up a bit, though my four lower bodies still were awash with the strong aftereffects of the hieronic beams. By the time I went to bed, the space beam from Conrad revved up once again. My heart chakra was greatly affected. I felt almost overwhelmed by the download of light. During this contact, I also experienced a closeness with Kut Humi, Chohan of the Second Ray, whom I serve in my functions with the University of Life. I tossed and turned and never got to sleep till after 3:00 a.m.

Note: The next day I found out that Robert and MariLyn also had had contact with Kut Humi on the 12th.

November 13, 2013. DREAMS. Once I finally fell asleep in the wee hours of the morning, after another massive download of light, I had two dreams. In the first one, Cheyenne the astral dog was in bed with me. I held her, gently stroked her fur, spoke to 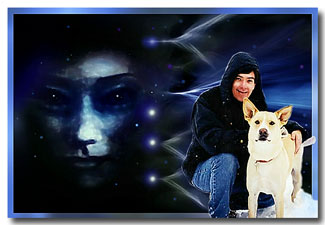 her, and affectionately kissed her on the cheek. Her “smiling” facial expression, bright eyes, and auric vibration all indicated she was very happy to be with me and to receive the loving attention. And I too was thrilled to see her once again!

In the second dream, a pleasant young blond woman, a type of insurance agent, visited me in my office. She had come to check on me and my car. We walked outside, and I grabbed a pressure gauge and checked the air in both front tires. Although the pressure was still normal, I discovered that the valve stems of both tires were loose and needed to be tightened. I reported the discovery to the woman, who had been standing beside me the whole time. I awoke before I could check the rear tires.

Interpretation: The first dream is an actual interdimensional contact with Cheyenne. Since the start of the hierarchal mission to Washington, D.C., once again I’ve been missing her greatly. It seems that everywhere I turn, I half-expect to see her standing there in physical form. Perhaps she is indeed present, though guarding me from the astral.

The second dream represents a hierarchal guide (the young blond woman) who has been sent to check on the energy alignment of my four lower bodies (the tires of the car or vehicle by which I operate on this Earth plane). I’ve been feeling under great pressure, almost overwhelmed, as I try to stay centered in the Christ light during the hieronic energy transfers in recent days. Although the two front tires still are functioning adequately, with normal air pressure, the valve stems themselves are loose and need to be tightened. That is to say, the dream gives me a telltale sign to remain focused, to tighten or secure my spiritual “valves” in order to insure that my four lower bodies (mental, emotional, astral, physical) remain stable and safe as I operate on the third dimensional plane.

The young blond woman remained unidentified. However, given that I had just dreamed of Cheyenne, when I awoke my thoughts naturally turned to Kaileah, Cheyenne’s astral trainer, who also has appeared to me as a young blond woman. Again I gave thanks to Spirit for Kaileah’s expert care of Cheyenne.