ST. GERMAIN/DR. HANNIBAL: All has now been set vibrationally. I am St. Germain/ Dr. Hannibal, speaking through this Motah-centered disciple unto the triangulated team. We have cleared the way, with hieronic assistance, utilizing the transmutation flame in order to synchronize all lines of force upon these etheric levels with you, and between myself and Summalt; and we shall be ready for the handoff. 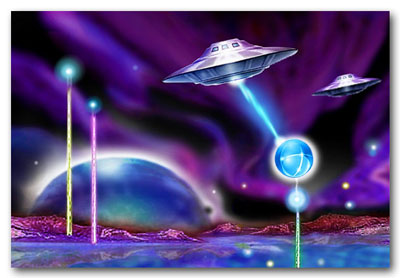 All has been cleanly examined and evaluated, and we can here state that all is in order to proceed effectively on your time schedule, and on ours as well from these inner realms, for the Eastern European Mission.

From my coordination craft #1235, I shall of course remain here within these environs of the Western Hemisphere during the outpouring of these hierarchal decrees and announcements to come. But everything that occurs upon this mission will be relayed back and forth clearly upon these adjusted lines of hieronic force, and therefore will demonstrate smooth integration for the manifestation of the complete package of hierarchal energizations within the Eastern Hemisphere, as coordinated ultimately from Sananda aboard ship #10.

Summalt is preparing to move his mother craft from his present location in the eastern Mediterranean, as signaled before, and will be stationed in the etheric over the Russian 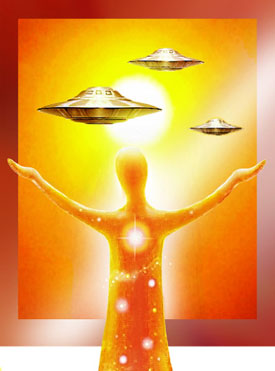 motherland to welcome you upon your arrival. He has assigned security forces from his battle group to receive you upon my handoff as you travel initially to Paris.* These security forces will have you within their completely protective auric sphere and will guide you safely to St. Petersburg to begin your work there.

That is all we need to disclose at this moment in time, for the purpose is to assure you that all has been set up in advance, has been cleared, and is being effectively integrated from these etheric realms for the physical externalization of this hierarchal mission to take into the Eastern European region the Christ matrix and holy thought power of peace, love, cooperation and coordination.

We shall tweak what may be necessary in the next two weeks before your departure, but basically all is in readiness. Pace yourselves accordingly so that you may receive our input at the appointed hour.

I have brought in my own security forces for this Motah channel, who shall remain here at I Am Nation headquarters during the course of this mission. That is why Jontel of Saturn has been in attendance at this session, as well. Everything that you achieve in Eastern Europe will be transferred along these clear lines of force and anchored at this headquarters focus, that it may be further broadcast unto the light-worker ranks on the physical plane to solidly anchor these forthcoming projections of light and hieronically enhanced substances to transform your planet and to prepare it for this next step in the Golden Age.

Allah-Lu El Morya joins this session to assure the triangulated team, his staff on the physical plane, that he has made all necessary trip arrangements with his crew in the upper astral realms, to help make this a smooth and joyous adventure.**

As Sol-O-Man/Mary already has conveyed, be at peace and you shall travel in peace, in order to fulfill Sananda’s designs for this stage of his Second Coming program. From within his sacred heart, he accompanies you each step of the way.

So be it in truth. I see nothing further to add at this moment. St. Germain/Dr. Hannibal, incorporating myself through these words and these actions through this focus. Over and out.

Note: During our Hierarchal Board meditation, two weeks before Robert and MariLyn depart on the Eastern European Mission, we focused our thoughts on protection and on our ongoing spiritual preparations as a triangulated team.

Via amplification from a hieronic beam, Jontel of Motah, a Saturnian guardian of the Sixth Ray, overshadowed me. He typically appears to me clothed in a glinting space uniform of metallic-blue light. Preparing my force field hieronically, he began sweeping me with the violet flame to clear all lines of energy force. My various chakra centers were revved up considerably, resulting also in facial transfigurations. 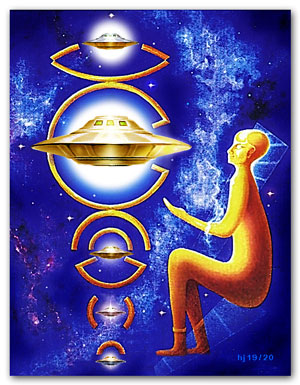 Jontel was in direct coordination with Summalt. In fact, they both employed their characteristic signatures as they slowly moved my hands in universal sign language during the energy buildup. At one point, my left hand was placed over my heart chakra, while my magnetized right hand was levitated to my throat chakra, then to my third eye, further clearing my auric field. I thought either of them, or both jointly, might channel. But St. Germain/Dr. Hannibal, my master teacher, suddenly appeared and assumed command over the procedure. He, too, raised my left hand in his characteristic signature.

As St. Germain indicated in his communication, he has assigned Jontel as one of my etheric guardians during the mission. A fellow Sixth Ray disciple of St. Germain, Jontel has performed this security role with me before, most recently during the Easter cycle last spring. In this role, he stays mainly in the background.

In the midst of the energy tie-in, and before the vocal channeling, the master Hilarion and Krator of Mars both entered my force field, separately and briefly, to signal their inner plane coordination for the Eastern European Mission.

The heightened energy throughput of the channeling session transformed me vibrationally. For a while afterwards, I felt a tingling sensation in my physical body and an expansion of my auric field, especially around my head chakras.

Attesting to St. Germain’s telltale statement — “We shall tweak what may be necessary” — later that night I dreamed that a young computer tech was busy tweaking the software programing on my office database computer. Robert also was there, observing him. While the IT expert worked, I connected a different printer to the computer and printed out a test sheet. Several lines appeared in an indecipherable script, as if they were hieroglyphs of an outer space language.

* battle group: this military term (evoking the naval designation of a carrier battle group) is an encoded watchword for the Battle of Armageddon, the struggle between the forces of light and darkness within the soul of man during these Latter Days.

In my simultaneous clairvoyant receiving, this code suggested too that even though Summalt would move his flagship #7423 from the eastern Mediterranean to Russia for hieronic projections during the mission, ample spaceships of his etheric fleet would remain in position over the Middle East and elsewhere, in order to coordinate ongoing projections throughout the Eastern Hemisphere.

See Summalt’s and Krator’s communications of July 18th and 25th, respectively, regarding emergency projections to the Middle East. Given the worsening civil war in Syria, including concern over the disposition of Syria’s chemical weapons, and the potential crisis between Israel and Iran over Iran’s nuclear program, the emergency remains in effect.

** Allah-Lu: a title similar to Christ, in another realm of this solar system. L is a symbol of the Elder race. L also symbolizes the descent from the spiritual to the Earth plane level. U symbolizes lifting from the Earth plane of both negative and positive energies back up to the Divine Source.

In the channelings via Nada-Yolanda, the term often was used in reference to El Morya, Prince of the planet Neptune and Chohan of the First Ray. From his assigned position of coordinating light workers in the upper astral planes, El Morya/Mark, cofounder of Mark-Age, remains in effect our executive director, guiding and protecting our operations on the physical plane.

LISTEN TO PODCAST: Click on the “Play” button below to listen to the above communication, as recorded live on 8/22/12. This recording was released on I Am Network of Light tape #1053A, for the week of 9/23/12.