November 9, 2011. HIERARCHAL BOARD MEDITATION. A half hour into the meditation, Katoomi of the Hierarchal Board suddenly appeared in my auric field. Known also as Lord Michael of the First Ray of Will and Power, the archangel uses the name Katoomi in his functions as co-titular head, with Lord Maitreya, of the governing council of our solar system, also called the Saturnian Council. Katoomi’s distinctive vibration 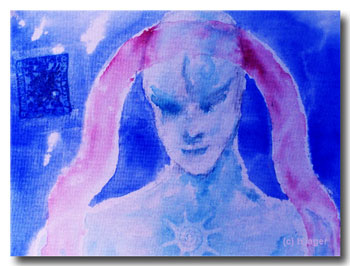 immediately lifted me into an awareness of his command over the entire solar system.

Once he absorbed me into his celestial force field, he established an open mental communion. He relayed that he was connected in triangulation with two anchoring points on Earth; that is, with Robert and MariLyn in Brasilia, capital of Brazil, and with me at I Am Nation headquarters in Tennessee. The locations, one in South America and one in North America, were significant: in Brasilia, Robert and MariLyn were in close proximity to a representative physical government; and in Tennessee, I was at the site representing spiritual government to come on Earth.

Katoomi issued a Hierarchal Board decree to all governments throughout his realms of dominion within this solar system: “All must align themselves with the cosmic laws of God, the divine principles of creation, in order to pierce the veil to enter the New Age of Aquarius. I bring the word of truth, using the sword as necessary, in order to strike out error and to plant the truth throughout all kingdoms forevermore.” Alignment with the will of God is the first step, he emphasized.

Katoomi specified that his First Ray projection, although sent to all planes and planets, especially would “secure the foundation of divine government throughout Earthman’s physical and astral governments, to be aligned with all governmental bodies within this solar system.” He added: “Anchoring this projection throughout the Western Hemisphere is a positive action that will plant the seed also in the East, that the entire planet may be realigned for this purpose.”

During the hour-long broadcast, I asked Katoomi several times if I should go sit at the computer and take his dictation. He replied that his energy projection was more important. Also, he did not wish to strain my physical system further, due to the meticulous, superconcentrated energy balance that would be required to channel a word-for-word message. He had given me enough of an energy load as it was. So, however I might later transcribe his intentions would satisfy his needs. For me, it was just as well, given the overwhelming power of the overshadowing. For I felt literally pinned to my chair, and I’m not sure I could have moved anyway! 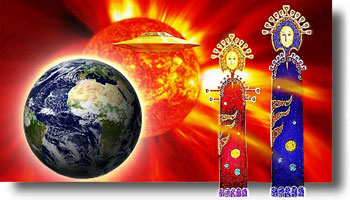 In Katoomi’s magnificent presence I was lifted into the vastness of solar system consciousness. I became acutely aware of the many grades and collective groupings of man’s governmental systems everywhere in the multiple planes and planets of our sun unit. Yet, viewed even at this stupendous solar scale, we are but one congregation of Son-of-God consciousnesses evolving amidst untold civilizations of our Father-Mother God’s eternal creation: worlds without end.

While I marveled at Katoomi’s command over our solar system, another veil lifted from my mind. The archangel elucidated: “As Katoomi, in my responsibilities to the Godhead, I have the ability to overshadow simultaneously each and every entity within this solar system of my dominion, in order to sound the keynote for each one’s alignment with the will of God.” Thunderstruck, I realized he was demonstrating his ability at that very moment.

In closing, Katoomi said: “This projection is the first step that secures the foundation for all actions to follow, leading to fulfillment of Seventh Ray ‘love in action’ in times to come. So be it in truth, for it is in truth you must act.”

The archangel’s appearance slowly dissolved. When I came out of meditation, I was vibrationally transformed. Katoomi had initiated me into a new octave of my Motah functions for the Saturnian Council. I understood then the seamless coordination of Katoomi’s projection with the initial Saturnian Council download of the 7th, two days prior.

Pondering Katoomi’s astounding statement of his ability to overshadow everyone simultaneously in our solar system, I recalled what Sananda, speaking of the Second Coming, had channeled via Nada-Yolanda on September 24, 1968:

“When the time does come for this great manifestation of truth and light and the entire raising of the planet in one single accord, I can make myself felt through every vessel, through every cell which does reside upon the Earth. By this resounding note it becomes amplified through every single individual who raises himself up at that moment into his own Christ consciousness — which is one meaning of the Second Coming, that of his own Christ consciousness — and allows my individualized Christ embodiment to occupy, to accelerate and to transmute the vessel simultaneously. . . . I give you all strength that is in me, for I occupy you when you will it. As I occupy your consciousness and your plane of development, I accelerate and change you into that which is good and united with the Christ Self in me.”

Note: See also Robert’s meditation contact with Katoomi on November 11th, in Brasilia, Brazil. (Click here.) It was only afterwards, when we exchanged e-mails, that we became aware of our co-receiving!

One thought on “Secure Foundation of Divine Government”