October 13, 2009. MEDITATION. In the afternoon, I meditated to work once again with my balance and realignment. For five nights in a row, I’ve had significant skin reactions — red splotchy outbreaks like hives — that develop late at night and in the wee hours of the morning, disrupting sleep. Each time, by the morning, the symptoms virtually have disappeared. I’ve continued my holistic treatment.

In meditation, I appealed to my teachers for guidance and understanding. Deep in communion with my I Am Self, I received the following phrase, explaining the current energy wave to effect light-body anchoring: “We are attempting a tighter fit, hoping to manifest possibly for several days what we used to do for several hours.” 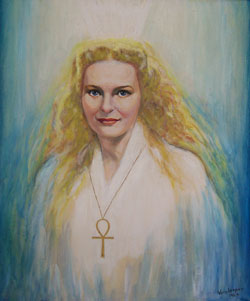 Immediately this sentence reminded me of something Glo-Ria had channeled through Nada-Yolanda on August 14, 1963: “Time of an etheric body to relate itself to the function and energy motion — frequency vibration, if you will — of the Earth is limited, extremely limited, and may only appear perhaps for moments, even seconds. It is getting so that as you evolve in consciousness and uplift yourself, you may in time — within the next forty years, at least we hope — be able to bring about the manifested etheric form for days, but we cannot guarantee this as yet.” (See Visitors From Other Planets, page 168, and Life in Our Solar System, page 189.)

During the current cycle, wherein the Hierarchy is infusing the light workers with a doubling of energy, I am being brought quickly into closer alignment with my light body — “a tighter fit” — in order to handle the increased load of energy projections into mass consciousness.

Note: That evening, for the first time in days, I did not experience an extensive skin rash, only a couple of minor bumps, and I slept undisturbed through the night. This was confirmation that I was finally achieving a better alignment with my light body.

October 14, 2009. HIERARCHAL BOARD MEDITATION. I came into communion with the Conrad space team. These are the etheric “space scientists,” under Dr. Hannibal’s command, who are conducting the current series of experiments to raise my vibration. They were depicted in my dream of October 11th, wearing vivid blue and chrome uniforms. Suddenly I remembered that when I had my first dream contact with the Conrad group in 2001, they all wore a one-piece space suit of a vibrant blue color.* 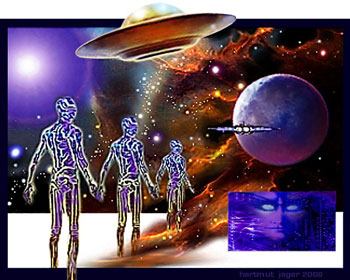 From the Conrad team, I received: “Stage one is complete.” That is, they had achieved a new plateau of raising my vibrational frequency to effect “a tighter fit” of the light body, as described in yesterday’s meditation. “Stage one” may refer also to the first of two significant energy waves, as revealed in my dream of October 8th.

Regarding the “tighter fit” or closer alignment with the light body, I was given the following analogy: The four lower bodies — mental, emotional, astral, physical — are like four insulating layers of fabric; which must interface smoothly and seamlessly, as coordinates, so the outer layer, the light body, may fit snugly over one’s entire manifestation of frequency form. Think of the layers as the inner parts of an astronaut’s space suit. They must be evenly sewn, not rumpled or wrinkled in any way, so that there are no misalignments or breaches between them and the outer protective layer. When one is encased comfortably within this formfitting fabric of light, the clear projection of energy flows unimpeded from the etheric or Christ body through the four aligned layers of the mental, emotional, astral and physical bodies.

Achieving a snug fit with my light form has caused accelerated internal reactions — within mind, soul and body — which have manifested outwardly in the skin rash. In another analogy, my physical reaction may be likened to the abrasive, scratchy feeling one gets from wearing wool directly against the skin! Unless one is desensitized to the wool, the feeling is very uncomfortable.

In a demonstration of the proper alignment, my light body overshadowed me comfortably. I then came into communion with Dr. Hannibal/St. Germain, who is overseeing my progress. Via mental telepathy, he reiterated that stage one of this process is complete. They now can begin stage two.

Eventually, when the tailored fit of my light-body “space suit” is perfected — literally, when I am “better suited” — he will be able to overshadow and to project more clearly through me, with much greater force, in order to effect his masterful work of transmutation. The power and the impact of his etheric projection will be similar to the highly charged electromagnetic energy emitted from a physically materialized etheric spacecraft. The heightened vibrations will transmute everything within orbital range. The violet flame of his I Am presence will produce instant effects on those people and situations with which he works during any given overshadowing.

Note: That evening, and through the night, again I was symptom-free of the skin rash. The new light-body alignment is taking hold.

* June 23, 2001. DREAM. While I was standing outside, a large scout craft flew low overhead, passed over the house, and landed in the backyard. Out stepped about a half dozen space beings, male and female, all wearing a one-piece space suit of a vibrant blue color. They were part of the Conrad group. After acknowledging me silently, they went about their task without further ado. Spirit revealed to me that they were on a healing mission at our headquarters.

2 thoughts on ““Attempting A Tighter Fit””