October 7, 2009. HIERARCHAL BOARD MEDITATION. Robert, MariLyn and I again focused our projections on the four-step Christ matrix: peace, love, cooperation and coordination.* The light-body overshadowing, amplified by higher plane energy from spacecraft, was so 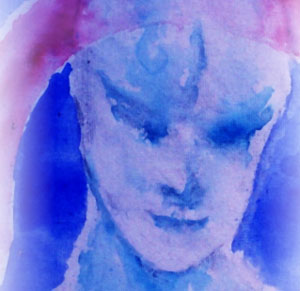 strong that it seemed to bear down through my crown chakra with actual physical weight.

I felt new, subtle sensations in my auric field and had the impression that something new, something big was coming. In my inner vision I saw a gigantic hundred-foot-high tidal wave rushing in. This symbolized the hierarchal energy that was being released in the fall cycle.

In the sharing afterwards, Robert and MariLyn both said they too had felt the increased power. Reminding us of what I had received in last week’s meditation, Robert commented that this must be the “doubling of reserves” also for us.

October 8, 2009. DREAMS. (1) Robert and I were giving a seminar to a group of light workers. Robert explained that the hierarchal energy influx for the fall cycle would come in waves. But beware, the first two waves will be significant and have great impact; then the others will follow.

(2) When I turned on my computer, I was astonished to discover that it had been infected by a virus. I hit Control/Alternate/Delete to force a restart. But when the computer rebooted, the virus again appeared, taking over the operations. I began to consider other ways to work around the virus, to quarantine and eliminate it, but I awoke before I’d instituted any measures.

(3) Light workers, who were visiting someone nearby, came over and broke into my house, actually picking both the dead bolt and the doorknob lock. A pack of dogs came with them. The individuals were not overtly of evil intent, but just were willful and self-centered, unconcerned or unaware that their behavior was beyond the pale. Greatly appalled, I confronted them, demanding that they leave or I would call the sheriff. I ushered them out with authority.

However, soon they came back, and brought a dozen or more cohorts with them. Again they broke into the house. Again I confronted them forcefully, and threatened to call the sheriff. I finally drove them out.

Interpretation: The first dream, following on the heels of the hierarchal guidance from last night’s meditation, is self-explanatory. We are being warned of the energy influxes.

The second two dreams, obviously, are warnings to be more vigilant about protection. Negative forces, or less-than-enlightened individuals, are stirred up and are attempting to make incursions into my consciousness and force field. (The pack of dogs represents the mortal, animalistic nature, as well.) Immediate, stalwart action with the sword of truth is needed. The sheriff symbolizes the authority of the Christ light and truth.

The third dream also reminds me of Jesus’ parable in Matthew 12:43-45: “When an unclean spirit comes out of a man, it goes through arid places seeking rest and does not find it. Then it says, ‘I will return to the house I left.’ When it arrives, it finds the house unoccupied, swept clean and put in order. Then it goes and takes with it seven other spirits more wicked than itself, and they go in and live there. And the final condition of that man is worse than the first. That is how it will be with this wicked generation.”

When we sweep clean our house and put it in order, when we cleanse our consciousness of negative or unenlightened thoughts — “unclean spirits” — we need also to be vigilant to reinforce our mind, body and soul with positive thoughts and actions of our Christ nature, to build in a higher manifestation of our I Am Self. Otherwise, if we are not proactive with our protection, if we do not enhance our force field with positive pronouncements of light, we tend to attract the same mortal patterns, which reenter our consciousness and stir up more trouble than before. The cleansing can become a wicked cycle.

« “We Have Doubled Our Reserves”
Space Scientists Rev Up Experiments »

4 thoughts on “Double Your Vigilance”