August 25, 2020. DREAM. From an extraterrestrial source under the Hierarchy’s space command, I received a powerful channeled communication, stating in part that I would be under “a continually beamed hieronic broadcast.” The initial impact of the higher plane energy affected me greatly, and I strove to maintain balance within my auric field when the channeling ended. 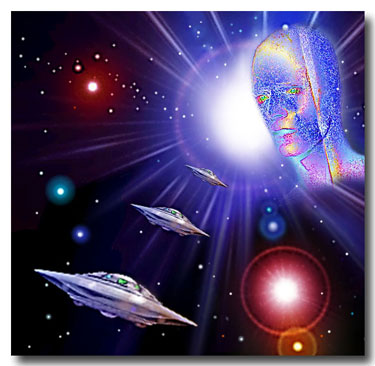 As I awoke, the considerable effects lingered. It was just before six o’clock. I got up and took Shasta outside. As I stood gazing heavenward, admiring the planets Mars and Venus in the predawn sky, my thoughts turned to Dr. Hannibal (Venus) and his lieutenant Krator (Mars), two of my primary hieronic contacts. Suddenly, a shooting star streaked closely past Mars. My dream message thus was marked with a visual exclamation point! Curious synchronicity, indeed.

Note: Though the specifics of the communication and the hieronic broadcast were not detailed to my conscious recall, there are plenty of needs requiring special attention now in our spiritual projections: the coronavirus pandemic and its devastating effects throughout the world; the violence, civil unrest and riots shaking American cities; the imminent approach of Hurricane Laura (a catastrophic category 4 as of August 26th), menacing the Texas-Louisiana Gulf Coast and forcing five hundred thousand people to evacuate immediately; destructive wildfires in California and other western states; plus, unsettling political storms roiling in the U.S.

These are just a few of the concerns on the minds of responsible light workers. The planetary thought atmosphere is discombobulated. As we link with those in the higher planes for accelerated hieronic broadcasts, may we all hold steady in the light of our I Am consciousness. Love God and Love One Another. That is the key.

I note, too, that this is the second dream in a month wherein I have received a channeled communication from the Hierarchy. See the dream of August 2nd, “Sananda to All: Be Vigilant!” Both dreams also followed preparatory dreams of cleansing [not posted]; that is, eliminating old residue in consciousness before receiving new spiritual input.

« Sananda to All: Be Vigilant!
Earth Logos Sends Warning »