Author’s note: Scroll down to the end of this article and listen to my original podcast, recorded in 2009.

BROADCASTERS OF LIGHT, blessings of peace, love and harmony to you. In our meditations in the lead-up to Pentecost, let us prepare ourselves for a further descent of the fire of light, to bring spiritual enlightenment to all on Earth. As you undoubtedly know, Pentecost celebrates the day the Holy Spirit descended upon the disciples after Jesus’ ascension in his fourth dimensional, light-body form. That day actually fell on a Jewish holy day known as the Feast of the Harvest, marking the summer harvest. Traditionally, that day also commemorated Moses’ receiving of the Ten Commandments.

So, we too are preparing to mark a new harvest of I Am consciousness on Earth. This spring season we have witnessed new spiritual breakthroughs, new awakenings, new dedications to serve the light. Since Easter we have been transferring this new wave of light into mass consciousness, and have been cooperating with the Hierarchy to raise the vibrational frequency of planet Earth. We shall continue this concentrated work for another month, through the summer solstice in June. 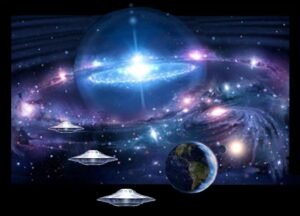 Before we turn our attention to Pentecost, let me share with you a contact I had on May 6, 2009, at our Hierarchal Board meditation. This experience strikes a harmonic chord with the descent of the fire of light at Pentecost. In my spiritual diary, I described the meditation as follows:

“Overshadowed by Sananda, I was filled with the divine peace and love of the Seventh Ray. Intuning with the Master, I received the phrase ‘harmonic eddy.’ To reinforce what had been introduced and achieved initially with the Easter spiritual breakthrough, the Hierarchy would send through a series of waves or ripples of light to inculcate the higher vibrations into mass consciousness during the rest of the spring cycle. These currents or ‘eddies’ are a harmonious amplification of the vibratory frequencies we successfully have grounded, but now must hold and work with from a new balance of light-body consciousness.

“Although harmonizing with the initial bombardment of light we had experienced Easter weekend, the rippling effect of these energy waves would be gentler, expertly timed and managed, so as not to shock or unsettle an already precarious balance in the mass thought mind, which is showing signs of increased stress. To use a cooking analogy, the new ingredients of light will be ‘folded’ into the mix of mass consciousness, not whipped or vigorously stirred.

“Along with the exchange with Sananda, . . . I was placed under a hieronic beam. The electromagnetic energy increased substantially and revved up my throat chakra, so much so that I thought there might be a vocal channeling. However, I never received a confirming go-ahead signal, so I simply passed the energy through and projected it out to the masses.”

The unusual turn of phrase “harmonic eddy” had me curious, so I later consulted a dictionary to see what hidden code might be revealed. Here’s what I found:

Eddy is defined as “a current of water or air running contrary to the main current, especially a circular current or whirlpool; a contrary or circular current (as of thought or policy).” An eddy current is “an electric current induced by an alternating magnetic field.”

Thus “harmonic eddy,” applied in terms of spacecraft hieronics, infers the amplification or multiplication of the original energy current that the Hierarchy implanted at Easter. It is an “eddy” because it runs contrary to the main thought current of mortal mass consciousness; it is “circular,” in that it reinforces itself in a wave motion.

It is clear then that the current buildup to Pentecost is part of this series of energy waves that are penetrating mass consciousness with higher spiritual frequencies. So, let us plumb now the meaning of Pentecost.

In his Metaphysical Bible Dictionary, Charles Fillmore, cofounder of Unity School of Christianity, gives the following symbology for Pentecost: “The metaphysical meaning of the ‘day of Pentecost’ is that in the unfoldment of the spiritual mind there are periods when the ideas that we have meditated on, and accepted as true, spring forth into consciousness, becoming living realities in our life instead of mere mental concepts. In this awakening we get the fruits of the ideas that we have planted in our mind.”

In a message through Nada-Yolanda on June 3, 1968, Sananda addressed the symbology of Pentecost. Although he spoke to the Mark-Age Unit at the time, his instructions still apply to us in this network today. Here is what the Master channeled:

“You are to prepare yourselves for expansion. . . . You are to expect much higher level of intunement coming through each and every one who is part of this intensified plan and work. You will experience a new level of understanding and functioning due to this acceleration and this particular way of working. 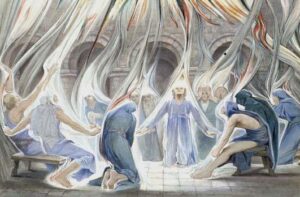 “You are not unlike the disciples whom I left immediately after my ascension during the span of life called Jesus of Nazareth. You indeed have commemorated this Pentecostal date on your calendar to coincide with the experience of Pentecost nearly two thousand years ago. It is explained in this manner. You must express the Christ force within and without the focal point of your own vehicles.

“Due to this, and exactly expressing or repeating the pattern set down by those prior to your time, in the original Pentecostal explosion, you are to be channels of your own Christ light and to exchange that similar vibration and frequency of the I Am presence within yourselves through the channelings and bodies and consciousnesses and deeds and desires of each and every other one. . . .

“Simply stated, and reiterated in this way, you are to set up a new pattern on a higher level and in the conscious contemplation of the high Self expressing through the Christ personality or identity in yourselves first and fundamentally. Secondly, the particularization or specialization of each one’s Christ Self must aid and fortify the Christ spirit and the body problems and mortal consciousness of each and every other one. This will tie in and be coordinated with, and then be expanded out or taught to, all others. 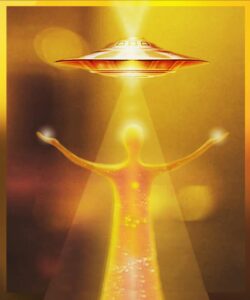 “In my days of Earth when the last incarnation was lived as Jesus of Nazareth, the disciples experienced Pentecostal infusion of light through spiritual faith alone and were not comprehending entirely, intellectually speaking, of the occult and mystical meanings of all that did transpire, regardless of my instructions before the ascension. So, the evolvement of the planet and of the light bearers and leaders, which you are, is in a higher degree than it was in those days and for that time period. This is only sensible and part of Spirit’s irrevocable and wise movements. So, be alert and patient and fulfilled in that understanding now. . . .

“So that we can be coordinated and as one, I have given much instruction to the planetary channels now incarnated, that they may have the aids and the prescriptions necessary to teach and to lead and to comfort all others who are not of this specialized functioning and . . . have not arisen to this level of service. Yours is a very special function and job and you will do it well, or as well as you are able. We feel certain of that, for you have passed the trials and the tests prior to this time, and lead us to this step and preclude any doubt or any question in our hearts or minds about what is to be accomplished.

“What you do will be a set example and a prescribed pattern for many who will follow in this pattern. Not all must do or will do or desire to do or need to do what here is being done. But by expressing the Christ Self within the soul evolvement and by allowing the Christ Self of others to express through each one individually and to lend support to his or her functions when necessary, you are expressing exactly what is done on the higher planes of life in the etheric and the celestial levels of creation for this solar system and throughout all the universes.

“So, what you are doing is of great importance and most necessary. But do not suspect or desire that each and every other light group or initiated soul into spiritual service must follow this exact pattern. . . . But because of the pattern others will express and grow and be what is their natural heritage: sons of God. In that consciousness all men will know and will do. They will work as they are meant to work: light bearers, leaders, children of the one Father-Mother God.”

Broadcasters of light, let us go into meditation now and strike a harmonic chord for Pentecost. We become the light, we bear witness to the light, and we transfer the light to all on Earth. So be it.

Revised from I Am Network of Light audio broadcast #966A, released in May 2009.

LISTEN TO PODCAST: Click on the “Play” button below to listen to my original recording of “Pentecost Harmonics.”

One thought on “Pentecost Harmonics”