April 18, 2014. GOOD FRIDAY MEDITATION. Robert, MariLyn, Larry and I joined in meditation at 3 p.m. on Good Friday. Alanar of Uranus clamped a hieronic beam onto my crown chakra. Through me, he and his team projected Fifth Ray energies of healing and harmony to the 144,000 elect. The light workers, acting as grounding agents, would transfer the energy to all in mass consciousness as well as to the devic-elemental kingdoms. 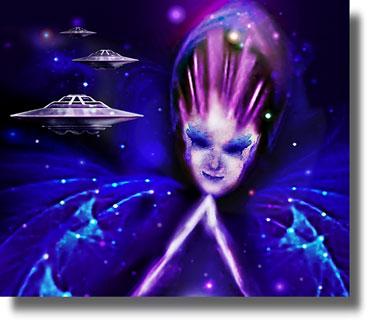 My meditation was deep and peaceful. Basking in a state of newfound balance, I felt entirely integrated with the vibrational frequency of the new Uranian contact. I received the impression that Alanar had been working with me especially in my sleep state, and at other times behind the scenes over the past five days, in order to braid his vibration with mine on a harmonious wavelength. For some moments, his face appeared clearly on my third-eye screen. He was smiling and wearing some form of tight-fitting headgear, part of his uniform.

At one point during the hieronic projection, I became encased in a transparent “bubble suit” — that is the only way I can describe it. Composed of a thin, gelatinous etheric substance, the auric garment completely covered my form, including my head. The space suit apparently assisted my integration with the transfer of hieronic energies.

The whole time, I focused my projections on the 144,000 elect, decreeing that they would be unified and harmonized, and would be receptive to a new resurrection of the light body on Earth, following Sananda/Jesus’ pattern of demonstration. So be it.

April 20, 2014. EASTER SUNDAY MEDITATION. Robert, MariLyn, Larry and I sat for meditation at 10 a.m. In a vision, a translucent white orb, as large as my auric field, appeared in front of me. It represented the planet Earth; more specifically, the unification of a new heaven with a new Earth. I blended completely with it, radiating the four-step Christ matrix — peace, love, cooperation and coordination — to all on Earth for a new resurrection of cosmic consciousness.

Eventually, my Motah Self overshadowed me with greater strength and unification than I’ve experienced in some time. In the rarefied electromagnetism of my light-body consciousness, I grounded the solid awareness of our reunification with the Federation of Planets. I had reached a new octave in expressing my high Self functions and responsibilities for Earth. The Motah demonstration also became a precious gift of personal resurrection on this Easter Sunday. As we give, so we receive. Thank You, Father-Mother God.

Pondering the meditation afterwards, I recalled the statement Alanar of Uranus had made in his communiqué on April 16th, a few days ago: “The blending from these higher spheres takes you into a new level of synthesis with the Federation of Planets.”