January 27, 2014. DREAM. From high atop Mount Moriah, I observed Noah leading his band of disciples to safety, crossing the mountain pass far below.

Later, I had a transformative vision: my sacred heart, like that of Christ Jesus, was ringed with a crown of thorns. I shared my life-altering experience with a fellow light worker. 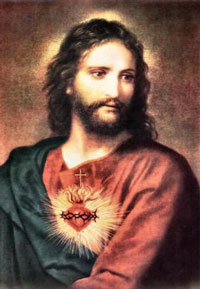 “Whether we face our own karma,” I said, “or encounter the pain of others within and without, we must transmute it with love.”

Interpretation: When I awoke, I knew I’d heard of Mount Moriah before, but I didn’t recall where it was. Thinking the name had biblical import, I searched Charles Fillmore’s Metaphysical Bible Dictionary and discovered that Moriah is one of the high hills of Jerusalem. According to tradition, Abraham built an altar on Mount Moriah to sacrifice his son Isaac. Also, on this spot, King Solomon built the Temple to worship God and to house the Ark of the Covenant. (Thus, Moriah is also referred to as Temple Mount.) The name Moriah means “vision of Jehovah; revelation of Jah; chosen by Jehovah; Jah provides; fortress of the Lord; bitterness of Jehovah.”

Although Abraham was willing to obey God and to sacrifice Isaac, the angel of God stayed Abraham’s hand at the last second. Fillmore writes: “When changes take place in the consciousness there are sometimes very bitter experiences, and a stout faith is needed to believe that good will come out of them. But good always comes if there is a steadfast obedience and faith in the goodness of God. 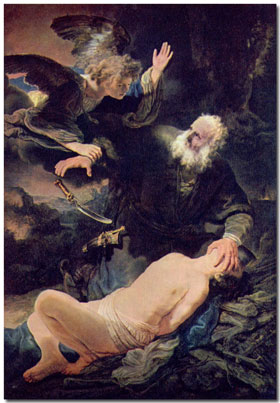 “Great power in spirit and in body grows out of this steadfast overcoming, this giving up of the old and entering into the new. . . . God provided (“Jah provides”) a sacrifice [ram] for Abraham. His son Isaac, who represents the Christ or new birth in individual consciousness, was restored to him and Abraham became the father of a multitude. . . . Thus in one’s giving up self and holding firmly in faith to the higher good, multitudes of Truth ideals come to one (“vision of Jehovah, revelation of Jah”), until one’s whole consciousness and life are transformed.”

Moriah is the holy land (solid matter) upon which I build my temple of I Am consciousness on Earth and consecrate my covenant with God. From the heights of I Am wisdom and insight (top of Mount Moriah), I observed Noah leading his band to safety. That is, from a spiritual elevation, I can see clearly the past akashic record.

According to Nada-Yolanda’s revelations, Noah was not an individual but a group of light workers (Noahs) who did the will of God in the latter days of Atlantis. Prior to the civilization’s destruction (Great Flood), they heeded God’s warnings and provided for the “safe passage” of spiritual knowledge from one age to the next. They preserved the teachings of the Hierarchal Board, including a spiritual understanding of the proper balance of positive (male) and negative (female) polarities needed to perpetuate life form on Earth. (In the allegory of the ark, Noah brought the animals aboard two by two, male and female; hence, balanced polarities.) Sananda, who later incarnated as Christ Jesus, was leader of the Noahs. 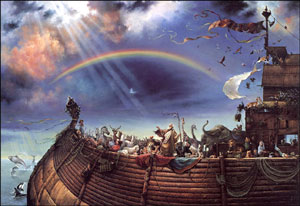 As it was in the last days of Atlantis, so it is with our civilization now, prior to the Second Coming. Will we choose to serve God, first and foremost, and thereby help our fellowmen to survive the transmutation of these Latter Days? The key to selfless service (sacrifice) is encoded in the commandment Love God and Love One Another. Our demonstration of selfless love, properly motivated to serve a spiritual cause, is a function of the Third Ray of Personal Love.

In the highest consciousness (atop Mount Moriah), we achieve spiritual transmutation through divine love sacrifice. Around our heart we each wear a “crown of thorns”  (which often pricks us with poignant lessons and “bitter” challenges, as it did Abraham). Through his sacred heart, ringed with thorns, Christ Jesus shows us the way of divine love sacrifice. As he did when he was leader of the Noahs, he leads us safely through our passage into a new dispensation of spiritual life.