Channeled via Phillel on February 9, 2011

SANANDA/MOSES: Lord of Hosts, be my rod of strength as I command: Let my people go! I am Sananda, Moses of old. Thus I spake unto Pharaoh those long ages ago; and thus I speak throughout the subconscious realms and the lower astral regions, unto the Earth plane upon which I plant this staff.

You must hold firm, just as I held firmly in my command to Pharaoh in Egypt to “let my people go.” I speak to the whole Earth. Truly it plays out once again in Egypt, as 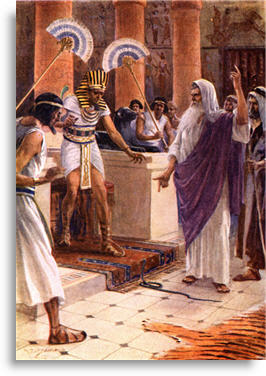 symbolic of the subconscious and the uncleansed region of man’s soul, and throughout the cradle of civilization of your present recognition, known as the Middle East. [1] These are symbols for you to reflect upon, because my command is for the entire Earth and to any and all powers of this realm that hold my light workers in bondage, enslaved to the third dimensional mesmerism of hate and power-mongering and all form of degradation.

Behold, I send before thee the luminescent cloud by day and the pillar of fire by night, the angel of the Lord. So spoke the I Am that I Am in those days through me, Its willing servant. And so I give this promise to you, that all powers of the heavens accompany you in this march into freedom.

You must hold firmly to this resolve, otherwise you will succumb to the plagues: the effects from the causes that all who in mortal consciousness have set in motion to deny the Living God His place within the center of your being.

I could lead my children out of Egypt only because I held in strength, without deviation, to this decree. I still hold this for you. My elect must so demonstrate for all on Earth. We are one link in the chain that binds us only to Father-Mother God, and not to mortal, third dimensional expression.

Therefore, receive this rod of strength, this staff into your hands. My staff exemplifies this in I Am Nation externalization. [2] So I decree, so I implore, so I expect all my light brigade on Earth to follow suit.

As you center yourself within this holy I Am command, so you will help lead your brothers and sisters of this mesmerizing plane into the promised land of my Second Coming as Sananda/Jesus the Christ.

There is no other option left to the light workers of Earth, if you are to see success of this interdimensional and interplanetary hierarchal plan to release Earthlings from the bondage that has enchained them for millennia. Those days are crumbling into the dust. For we march now into the new day. Children of light, follow me, and I will lead you into this promised land. 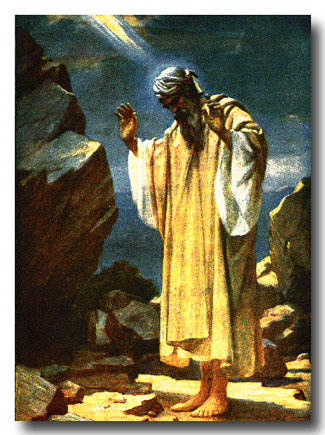 I speak with the strength and resolve of my incarnational aspect as Moses; and I fully superimpose my essence as Sananda, Prince of Earth, in and through this essence of my being.

Take thy shoes off from thy feet, for you stand on holy ground. Thus speaks the I Am that I Am. I Am has sent me, and I Am sends you.

May the Lord bless you and keep you. May the Lord make His face to shine upon you. May the Lord lift up His countenance unto you, and give you peace, followed by love, cooperation and coordination: the four-step Christ matrix that sets the foundation for the I Am Nation on Earth. So be it.

If you have ears, hear this command. If you have eyes, see now where you must go into the promised land of the New Age on Earth. Sananda as Moses speaks. Amen.

HANNIBAL-SUMMALT: We are Hannibal and Summalt. Just as the interdimensional space forces assisted in that wilderness march ages ago, so we stand with you and before you as the pillar of fire, to protect you, to give you understanding, to strengthen your resolve, and to demonstrate our oneness in the light of Almighty Father-Mother God. [3]

You who march are not alone. I Am is with you, as I Am is with us: the Lord of Hosts. Be infused with this fire of God as we help lead you through the perils of these Latter-Day changes. So be it in truth. Hannibal-Summalt, over and out.

Note: In the Hierarchal Board meditation, while I prayed for Egypt and the Middle East, Sananda contacted me in his aspect as Moses. He came in with such overriding force of determination and masterful command that it was challenging for me to incorporate his light-body vibration.

His appearance as Moses triggered in me a stream of emotions about the turmoil in the Mideast: the hopes and desperations of the protesters demanding liberation, clashing with the hard-heartedness of entrenched autocratic powers. But the Master’s contact also evoked personal soul memories of my incarnation with him in Egypt, during the Hebrew exodus through the wilderness. I had been in the priesthood under Aaron, yet had not lived to see the promised land.

My eyes welled up, and a tear rolled down each cheek. In full splay were the sweeping patterns of man’s history, now repeating themselves in the soul lessons of our own day. Entering the New Age, we break anew the oppressive bonds of mortal consciousness. We liberate ourselves through the power of the I Am.

As I was prepared for the channeling, my various chakras were rapidly accelerated. Sananda raised my hands to project his power as Moses. For a time, my body gently bobbed back and forth, in synchronous gyration to achieve a close fit with his light body; as if I were a hand that was being slipped snugly, by stages, into his glove. When our vibrations were synchronized, my auric and physical systems immediately became calm and settled, poised for the Master’s extraordinary energy release. Only then did I receive his signal to pick up the mic and begin the channeling.

Late Bulletin: The next day, February 10th, dramatic new events unfolded in the Egypt crisis. Initially, news sources reported that President Mubarak would announce that he would step down and relinquish power to his vice president, Omar Suleiman, that is, effectively to a provisional military ruling council. But later Mubarak said he would not step down, but would delegate some of his powers to Suleiman. The protesters were outraged but remained peaceful. The situation was in flux and remained potentially dangerous.

On February 11th, Mubarak finally announced he was resigning, and would hand over control to a military council to guide the governmental transition to democracy. The massive jubilant crowd in Tahrir Square in Cairo erupted, “Egypt is free! Egypt is free!”

[1] In the current Egyptian crisis, hundreds of thousands of protesters have been demonstrating daily since January 25th, calling for the ouster of President Hosni Mubarak’s thirty-year regime and for democratic freedom. Many hundreds of people have been injured, others killed, in clashes with police and pro-government supporters. Protests in Arab nations throughout the Mideast also have forced governmental changes.

[2] Sananda’s staff at I Am Nation headquarters is a test unit for the externalization of the Hierarchal Board on Earth and the I Am Nation to come.

[3] According to channelings through Nada-Yolanda, the pillar of fire and light that led Moses and the Israelites during the exodus from Egypt was a spacecraft.

LISTEN TO PODCAST: Click on the “Play” button below to listen to the above communication, as recorded live on 2/9/11. This recording was released on I Am Network of Light tape #1012B, for the week of 3/6/11.