HILARION/PAUL THE APOSTLE: Paul, known as Apostle to the Christ, humbled before the Lord, as you must be also. You know me as friend and brother to this I Am Nation Unit. You know me also as Hilarion, Master Chohan of the Fifth Ray of Unity, Integration and Synth 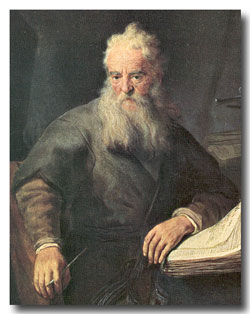 esis, etheric director of Healing Haven; and, along with Sananda and St. Germain, one of the seven lights of the Saturnian Council of this solar system. By the master teacher of Motah [Phillel], I am given leave to speak.

Thus, with these titles and responsibilities, a sacred covenant before God, I address the triangulated team, both of my Healing Haven designates on mission in Costa Rica [Dr. Robert and MariLyn] and of my presently acknowledged anchor point at I Am Nation headquarters in Tennessee [Phillel].

I have been present, both behind the scenes and in front of the scenes, as a hierarchal co-participant in this Western Hemisphere exercise to purify these inner and outer regions for advanced service in the Second Coming program.

Should anyone think it amiss that I, a master healer, would announce myself for these mission purposes, then follow carefully. For simplicity’s sake, and to make my point clear, let us pick up Sananda’s analogy of having performed an etheric tracheotomy to introduce a new fire of light and divine will into these regions, reviving thus a free-flowing exchange of higher light in this hemisphere for our upcoming externalization of hierarchal plans among key light centers and dedicated Christ workers.

When a tracheotomy is performed in emergency procedure upon the hapless patient, the obstructed airways immediately are cleared, allowing the breath of life to move unimpeded in its path. The first, immediate crisis is averted. Death has been waylaid: “O death, where is thy sting?” [1 Corinthians 15:55]

What begins next? Healing can begin! The energies of healing may begin their march to synthesis, integration, unity of systems to produce a rebalancing within the form. Yes, it can be an agonizingly slow process. But from proper care of expert physicians, with watchful eye, balance may be restored.

By this parable, then, you now receive further insight into our actions to stabilize the life-support systems particularly within astral and physical realms of this Western side of the globe. Transmutation and healing go hand in hand; one cannot purify without also maintaining balance, allowing the cleansing and purification to be integrated, or incorporated systemically, as Dr. Hannibal encoded in his previous communiqué.

Is it any wonder to my designated Healing Haven team, therefore, that I have sent you personally into these physical environs of Central America to advance our healing task; while Hannibal’s Motah representative of the Transmutation Flame remains in protected custody of hierarchal seclusion in Tennessee?

Sometimes there can be risk in introducing transmutation elements too directly into an environment not readily conducive to that exposure. (We take similar care, for instance, in introducing our materialized etheric spacecraft only in carefully guided setups that adequately can absorb the abrupt infusion of fourth dimensional amplitude.)

But when a soothing balm of peaceful healing and integration is brought onto the scene, oftentimes there is greater receptivity. What patient has not been soothed by the soft lullaby of a mother’s tender caress upon her child’s fevered brow? Surely you see the point.

All of these hierarchal measures — transmutation balanced precisely with healing — are called for now in order to breathe the divine will of Christ life into the auric atmosphere of this Western Hemisphere. By your conscious acceptance and action, as a sampling of Western symbolism, you gingerly plant these decrees and higher energies into the mass subconscious mind, the race subconsciousness — which means the astral or soul levels, also — whereby they inexorably make their way into externalization also in the Eastern Hemisphere. As previously stated, it is a planetwide operation. As a result, the Earth begins a new stage of healing, synthesis, unity and integration.

Thus I come as Hilarion, like unto the chief medical officer who makes his rounds, examines the patient, consults with the attending physicians and residents, and then makes his responsible evaluations and commands known, to be carried out by his loyal staff.

In a very real sense, I did the same as Paul, Christ’s apostle, offering my analyses and solutions throughout the Mediterranean communities of Jesus’ followers. And I never minced my words, but spoke as plainly as possible to all who would listen, king and peasant alike. I had no airs, for I had been ably humbled before the presence of the Lord. I became the little one in Christ.* In this meekness I commanded great strength, not my own as a mortal but the divine vitality and authority that issue from the cosmic I Am.

That is why I come also to you as Paul, your friend and brother, to help lead you on your journey. Be blessed in this same meekness, or humbleness, of Christ, that you may go forth and heal the nations of Earth and prepare the way for Sananda’s return.

Healing must remain a central focus during the oft-unsettling throes of transmutation. So I speak as Hilarion, your master and guide to healing humanity of its woes. Let this lesson be synthesized within you now. Blessings from your servant in Christ. Amen.

DR. HANNIBAL: Dr. Hannibal. From aboard my mother craft I assure you, our triangulated team on Earth, that your security and balance are our top concerns as you 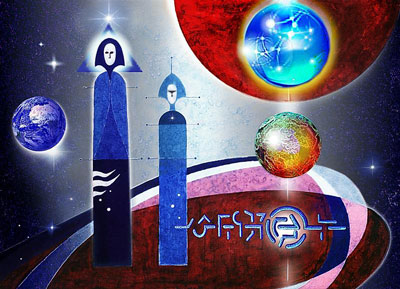 receive the heightened inflows of these hieronic vibrations. My crew constantly is monitoring you, each one, and gauging your integration and dissemination of this accelerated light to all within your orbits. We help keep you within the right auric color range, so to speak; adding this color wave or that, in order to amplify or enhance whatever vibrational sustenance will serve you, and us, beneficially.

Your light bodies therefore are very closely aligned now through your four lower bodies. The very stones beneath your feet are aware of the etheric wavelengths you radiate through the atomic structure of your environment, affecting human and lower kingdoms alike. So, tread carefully, yet with Christ confidence, knowing that your broadcasts of light have immediate and power-packed effect.

That is your demonstration of the light body in motion on this third dimensional, rising into fourth dimensional, plane of action. So be it in truth. Hannibal of etheric Motah Command, in interdimensional and interplanetary service to Sananda/Jesus the Christ. Over and out.

Note: I began the Hierarchal Board meditation at 7:30 p.m. About fifteen minutes later, I was flooded with an etheric green light. Hilarion made his presence known. Since he rarely contacts me (I can probably count the number of times on one hand, going back almost forty years), I questioned his identity repeatedly. I also appealed to Dr. Hannibal for confirmation. I wanted to be absolutely sure before opening myself fully to the contact.

Hilarion then transformed himself and stood before me as Paul the Apostle. “You know me as your friend and brother,” he said. He instantly evoked my soul-memory recall. In 1988, I dreamed that Paul had assisted me when I and others of the early Christian community had been imprisoned by the Romans.** Somehow Paul helped us escape execution (beheading) at the last minute, as if by divine intervention similar to his own, as well as to the disciple Peter’s, miraculous release from prison, recorded in the Bible. [Acts 16 and Acts 12, respectively]

Thus assured, and imbued with signals indicating a channeling was ready, I arose and sat at the computer. The dictation began at 8:11 p.m. and ended at 9:29 p.m.

* The name Paul derives from the Latin Paulus, meaning “small, humble.” Saul of Tarsus changed his name to Paul after his astounding conversion on the road to Damascus, when he encountered the resurrected Christ Jesus. [Acts 9]

The Romans planned to execute us by cutting off our heads. At one point I was even shown the sword that was to be used and was forced to shave with it. I was fearful though not in despair, as I kept hopes alive for an escape.

Suddenly, Paul the Apostle arrived on the scene to talk to me. (The dream was vividly first person at this point.) He also was dressed in a robe garment of the epoch. His appearance, in hindsight, reminds me of some paintings I’ve seen, though he was much younger. He appeared in his mid- to late forties, and he had a beard and a full head of dark greying hair. His demeanor was serious. He stood right in front of me and spoke to me solemnly. I pleaded with him to help us. In the back of my mind, I was reminded of the time when divine intervention occurred during his own release from prison as well as the prison escape of the disciple Peter. Paul consoled me.

Later, after Paul had left, the guards came to take us to the execution site. Paul again appeared on the scene and engineered a dramatic last-minute escape. At this point, the dream imagery was anachronistic, as we made our escape in an automobile. Paul was driving. We were under instructions to follow the guards, who were in the car ahead of us, but Paul quickly veered away at one intersection and we escaped. I then awoke.

Years ago I had a dream indicating a possible incarnation, as a small child, at the time of Jesus. [In the dream, I was about five years old. My sister and I and met Jesus of Nazareth once at a village well. I was struck by his extraordinarily kind and gentle interaction with us. It would have been a seminal highlight of that incarnation.] Perhaps this dream is giving another clue, indicating events later in that life. After all, the disciples and Paul continued to preach for several decades after Jesus’ crucifixion-resurrection.

« Blessed Are the Meek
Hieronic Injections of Light »

One thought on “Balance Transmutation with Healing”