May 5, 2010. HIERARCHAL BOARD MEDITATION. In a vision, I saw the planet Venus coming into cosmic alignment with the planet Earth, one planetary logos overshadowing and intermeshing with the other. Via telepathy, I received, “We are here to assist you.” The vision represented the alignment of spiritual forces from Venus who actively are aiding and guiding light workers on Earth during the Second Coming program and for the eventual reunification of Earth with the Federation of Planets. 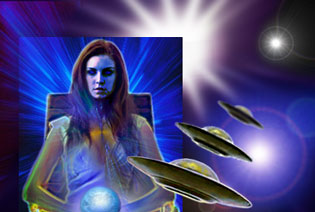 Then the same space “mother” who first had contacted me in meditation on March 24th [“Light-Body Fusing”] again appeared. Although she still did not identify herself by name, she conveyed: “I am a colleague of June. We prepared you for your service with Dr. Hannibal.”

[A teacher of the etheric realms, June of Venus often communicated through the channel Gloria Lee (Glo-Ria) and occasionally through Nada-Yolanda. According to Yolanda’s intunements and channelings, in past Venusian incarnations June was the mother of Glo-Ria, the sister of Yolanda, and the wife of Wains (Djwhal Khul).

In my own soul revelations many years ago, I recalled that I had used Venus as a home base for my training under Dr. Hannibal, through a series of lives, for my soul mission as Phillel in the Federation of Planets. From this home base, I traveled extensively throughout the solar system to become familiar with the different frequency vibrations of the various planes and planets. Though I have incarnated on other planets, including many times on Earth, I have returned often to Venus to hone my spiritual skills in service to the Motah Council. Also, I had trained with Nona (Yolanda) in the Temple of Love on Venus. Moreover, I’ve always felt a strong rapport with Glo-Ria, though I’ve never had any confirmation of direct association with her on Venus. Yet, if I had received training under June, as indicated here, I may very well have known Glo-Ria.]

In this meditation, a new layer of my Venusian soul record of training for Motah was thus unveiled, to be brought into further alignment in my conscious mind, in order to anchor a higher level of Motah functions on Earth. On a personal level, that explains another meaning of my initial vision of Venus coming into alignment with Earth.

In my psychic vision flashed scenes of my past training on Venus, including venues of crystal, light-filled wisdom temples or learning centers. But the short statement of the space “mother” offers this new key: in a Venusian lifetime, or probably a series of lives, these two female teachers — that is, June and the space “mother,” whose specific identity has yet to be revealed — had trained me as part of my Federation schooling. They helped prepare me for my service with Dr. Hannibal/St. Germain and the Motah Council.

Amid these scenes, I was transfigured by my Venusian soul record and appearance, bringing these revelations into my conscious application on Earth. After the meditation, I felt balanced and healed.

Photo: Mystery Lady © by Hartmut Jager. (Although this beautiful artwork in no way resembles the female space entity of my visions, I just couldn’t resist using it. Thank you, Hartmut!)